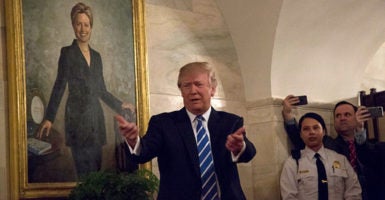 President Donald Trump walks in a corridor of the White House to greet visitors, while a portrait of Hillary Clinton hangs on the wall, on March 7, 2017. That same month, a report was released that concluded that Google search results favorable to Clinton influenced at least 2.6 million votes in the 2016 election. (Photo: Aude Guerrucci/Getty Images)

President Donald Trump and his 2016 Democratic rival, Hillary Clinton, began relitigating that contest on Twitter on Monday regarding the role that search results played in the election.

“Wow, Report Just Out! Google manipulated from 2.6 million to 16 million votes for Hillary Clinton in 2016 Election!” Trump tweeted. “This was put out by a Clinton supporter, not a Trump Supporter! Google should be sued. My victory was even bigger than thought!”

Trump won the Electoral College by a decisive 304 to 227 tally, but Clinton won the popular vote by 2.8 million.

Trump didn’t specify, but appeared to be referencing a report from the American Institute for Behavioral Research and Technology that detailed Google search results from 2016 that were favorable to Clinton.

“The debunked study you’re referring to was based on 21 undecided voters,” Clinton tweeted. “For context, that’s about half the number of people associated with your campaign who have been indicted.”

The study was conducted by researchers Robert Epstein, Samantha J. Shepherd, and Shu Zhang, all of the American Institute for Behavioral Research and Technology, and Ronald Robertson of Northeastern University.

Epstein, a former editor-in-chief of Psychology Today, is a senior research psychologist at the research institute and the author of 15 books. He’s also a Democrat and was a supporter of Clinton.

The numbers, based on a sampling of 95 voters, used a formula based on Epstein’s research from 2015 published in the Proceedings of the National Academy of Sciences on the effect of what he called the “search engine manipulation effect.”

For its part, Google rejected the charge of political bias.

“This researcher’s inaccurate claim has been debunked since it was made in 2016,” a Google spokeswoman told The Daily Signal in an email response. “As we stated then, we have never re-ranked or altered search results to manipulate political sentiment. Our goal is to always provide people with access to high-quality, relevant information for their queries, without regard to political viewpoint.”

The Google email response linked to a report on the topic from 2016 published in the Russian media outlet Sputnik. The link was part of the comment, but it wasn’t clear whether the company was implying anything.

Here are four things to understand about Trump’s most recent claim and Clinton’s response to the 2016 election and Google.

1. The Facts on Trump’s Claims

Trump tweeted that between 2.6 million and 16 million votes were changed because of Google political bias.

Epstein, not a Trump supporter, rejected the president’s characterization.

“I have never claimed that Google deliberately manipulated the 2016 election, and the upper limit I put on a possible vote shift was 10.4 million, not 16 million,” Epstein told The Daily Signal.

In Epstein’s testimony before a Senate Judiciary subcommittee in July, he told the panel: “This system must be built to keep an eye on Big Tech in 2020, because if these companies all support the same candidate—and that’s likely, needless to say—they will be able to shift upwards of 15 million votes to that candidate with no one knowing and without leaving a paper trail.”

That said, regarding the 2016 election, Epstein said in his testimony that votes shifted by manipulation of search results likely far exceeded the 2.6 million estimate.

“The 2.6 million is a rock-bottom minimum. The range is between 2.6 [million] and 10.4 million votes, depending on how aggressive they were in using the techniques that I’ve been studying, such as the search engine manipulation effect, the search suggestion effect, the answer bot effect, and a number of others,” Epstein said. “They control these, and no one can counteract them. These are not competitive. These are tools that they have at their disposal exclusively.”

2. The Facts on Clinton’s Claims

Clinton’s tweet said the study was “based on 21 undecided voters.”

That’s partly true. Actually, the study was based on 95 voters, of which 21 were undecided.

The report on the findings explains: “The method was implemented in the spring of 2016 in anticipation of the November presidential election. Ninety-five people from 24 U.S. states (mean age 39.9) were recruited, 21 of whom identified themselves as ‘undecided.’”

“I’m told that she got that number from Google, and it makes no sense,” Epstein said. “The 2016 monitoring system allowed my team to successfully preserve 13,207 election-related search results, along with the 98,044 web pages to which the search results linked.”

Clinton also called the study “debunked,” but that would be a matter of opinion.

In an email to The Daily Signal, Epstein said he is still a “strong supporter of Hillary Clinton,” but he challenged her claim.

“I’m not aware that any credible authority has debunked either my 2016 election-monitoring project or, for that matter, my controlled studies on new sources of online influence,” Epstein said. “When Google’s CEO said, ‘We take issue with Epstein’s methodology’ at a congressional hearing in December 2018, that was hardly a debunking.”

A Washington Post piece on Monday noted the study wasn’t peer-reviewed, and said, “On its surface, it’s dubious, as is the methodology underlying it.”

“My methodology was subjected to peer review at two different scientific conferences before I published that article. But peer review is somewhat irrelevant here, because the monitoring project was not a scientific experiment; it was the development of system—the first-ever—for capturing what Googlers call (in a 2018 leak to The Wall Street Journal) ‘ephemeral experiences’—powerful, largely invisible new forms of internet influence that impact the thinking and behavior of more than 2 billion people every day, and that I have been studying since 2013,” Epstein said.

“Schmidt in fact funded the Groundwork, a highly secretive tech company, the sole purpose of which was to put Clinton into office,” Epstein said. “And, of course, my 2016 election monitoring project showed significant pro-Clinton bias in Google search results for nearly six months leading up to the 2016 election.”

In a July op-ed for Fox News, Karan Bhatia, vice president of global government affairs and public policy at Google and a former George W. Bush administration employee, pushed back on accusations of bias:

Every day, our search engine handles billions of searches of hundreds of billions of webpages. To manage this volume, we rely on an algorithmic approach and implement rigorous user testing and evaluation before we make any changes to our algorithms.

These algorithms don’t detect political perspectives, much less use them in any way to determine how webpages are ranked. Objective third-party studies—including, most recently, a comprehensive year-long assessment of Google News results by The Economist—have found no evidence of ideological bias in either direction.

4. What the Report Says

Beyond the Trump and Clinton versions, the actual report runs five pages. Epstein’s written Senate testimony submitted for the Congressional Record is 28 pages.

“In the months leading up to Election Day, daily election-related searches automatically provided us with the first page of results from a total of 13,207 searches conducted using Google, Bing, and Yahoo through the Firefox browser, allowing us to preserve 98,044 election-related web pages,” said the final report, first released in March 2017.

Epstein told The Daily Signal in an email:

I measured bias on web pages by using crowd-sourcing (Amazon’s Mechanical Turk). Once I had average bias ratings for each web page, I could then compute bias in search results by looking at where in their search rankings Google, Bing, and Yahoo showed people search results linking to those web pages.

The bias I found was significant at the 0.001 level—meaning, roughly, that the odds that the bias was due to chance alone was less than one in 1,000.

That is a strong finding; having more field agents would have improved that finding only marginally, at best.

The research institute’s report said that between May and November 2016, “search results displayed in response to a wide range of election-related search terms were, on average, biased in Mrs. Clinton’s favor in all 10 search-result positions.”

The report asks, “Could the pro-Clinton bias in search results have shifted votes to Mrs. Clinton?”

A comprehensive study published in 2015 in the Proceedings of the National Academy of Sciences found that biased search rankings can easily shift the voting preferences of undecided voters by 20% or more—up to 80% in some demographic groups.

Extrapolating from the mathematics introduced in this report, in articles published in February 2016 and thereafter, the lead author of the [Proceedings of the National Academy of Sciences] study predicted that a pro-Clinton bias in Google’s search results would, over time, shift at least 2.6 million votes to Clinton.

During his Senate testimony, Epstein said, “I know the number of votes that shifted because I have conducted dozens of controlled experiments in the U.S. and other countries that measure precisely how opinions and votes shift when search results favor one candidate, cause, or company.”

Epstein made the comparison to the long-investigated Russian election meddling, with regard to impact.

“These effects are nothing like Russian-placed ads or fake news stories. Russian interference, although troubling and unacceptable, does not, in my opinion, shift many votes,” Epstein said in the testimony. “Ads and news stories are competitive and visible, like billboards. The kinds of ephemeral effects I am studying, however, are invisible and noncompetitive.

“They are controlled entirely by big tech companies, and there is no way to counteract them,” he said.