Contrary to What You Hear, Obama Is Deporting Fewer, Allowing More Criminals to Stay 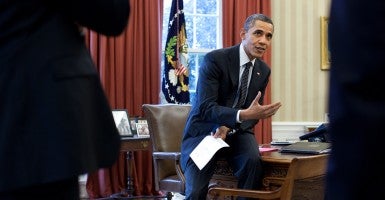 Total deportations by U.S. Immigrations and Customs Enforcement shrunk by 15 percent between 2013 and 2014, according to a new report by the Center for Immigration Studies.

Continuing a trend from last year, immigration enforcement activity by ICE officers has declined across the board in areas such as deportations and arrests, with some numbers dropping by more than 30 percent.

The Center for Immigration Studies, which seeks to limit illegal immigration, found in documents obtained through a Freedom of Information Act request that deportations from within the United States dropped 34 percent from last year and the number of criminal alien deportations declined by 23 percent.

At the same time, “the number of aliens who have received a final order of removal, but are still in the United States, has risen to nearly 900,000.” Of that number, approximately 167,000 are convicted criminals who were released by ICE.

“It has nothing to do with a lack of resources. It has everything to do with the fact that they simply do not want to deport more people,” Inserra told The Daily Signal.

Jessica Vaughan, the report’s author and director of policy studies at the center, said the decline in enforcement activity has been exacerbated by “the implementation of so-called ‘prosecutorial discretion’ policies” developed by the Obama administration in 2011.

In June 2011, former ICE director John Morton issued a memo to agency employees to provide “guidance on the exercise of prosecutorial discretion,” which he defined as “the authority of an agency charged with enforcing a law to decide to what degree to enforce the law against a particular individual.”

Morton’s memo gave ICE the discretion to decide when or whether to: grant deferred action or parole; execute a removal order; settle or dismiss a removal proceeding; or stop, question or arrest someone for an administrative violation, among other decisions. “This really destroys the concept of discretion,” said Inserra. “It’s supposed to be used to better enforce the law, and right now it’s being used to completely ignore the law.”

According to Vaughan, “ICE deportations from the interior have plummeted from a peak of about 236,000 in 2009 to about 100,000 in 2014” since prosecutorial discretion was put in place.