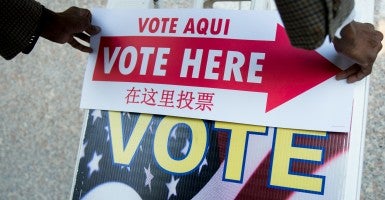 With little time before the midterm election, the decisions in the courts, including the Supreme Court, on the procedural rules that will govern the election keep coming on an almost daily basis. This has been pretty much the norm since the 2000 elections, as liberals and progressives have used the courts — rather than the legislative process — to try to change the rules governing voter registration and voting in order to benefit them politically.

In a prior post, I reported on court decisions in Ohio and North Carolina over early voting and same-day registration. After a federal district court refused to block North Carolina’s multi-pronged reforms — voter ID, eliminating same-day registration, shortening the early-voting period (from 17 days to 10), and banning ballots cast outside voters’ assigned precincts — the Fourth Circuit enjoined two of the four (the elimination of same-day registration and the ban on out-of-precinct ballots). However, the U.S. Supreme Court dissolved that injunction on Oct. 8. The high court’s 7–2 decision means that all of the changes made by the North Carolina legislature that had already been implemented by state election officials will remain in place for the Nov. 4 election.

As reported previously, the Supreme Court issued a similar order on Sept. 29 dissolving an injunction against Ohio’s elimination of same-day registration and reduction of early voting days from 35 to 28 days. Those changes also already had been implemented by state election officials.

On Oct. 6, the Seventh Circuit Court of Appeals threw out an injunction issued against Wisconsin’s new voter-ID law by a lower court. The court’s opinion, written by Frank Easterbrook, systematically dismantled all of the frivolous claims made by opponents of voter ID. However, three days later, the U.S. Supreme Court restored the injunction, so it will not be in effect on Nov. 4.

Although the Court’s one-page order was unilluminating, a possible reason for its decision can be gleamed from the dissent filed by Justice Alito (and joined by Justices Scalia and Thomas). Unlike the changes in North Carolina and Ohio, the Wisconsin voter-ID law had never been implemented because of the various injunctions issued against it in both state and federal court. The ID requirement applies not only to in-person voting, but also to absentee ballots.

As Justice Alito noted in his dissent, there “is a colorable basis for the Court’s decision due to the proximity of the election” and the fact that it was “particularly troubling that absentee ballots have been sent out without any notation that proof of photo identification must be submitted.” Other conservatives on the Court may have signed on to the majority opinion because the state already has mailed out absentee ballots to voters who had requested them without informing them that they had to meet the new ID requirement.

Despite that, Alito would not have dissolved the Seventh Circuit’s stay because, according to precedent, the Supreme Court “may not vacate a stay entered by a court of appeals unless that court clearly and ‘demonstrably’ erred in its application of ‘accepted standards.’” Alito, Scalia and Thomas clearly believe that test was not met in the Wisconsin case. Thus Wisconsin’s voter ID will not be in place on Election Day, but this clearly was not a decision based on the law’s merits.

The Wisconsin decision, viewed in conjunction with the decisions in the Ohio and North Carolina cases, indicate that the Supreme Court is stopping federal courts from changing the rules applying to the conduct of the registration and voting processes right before the election.

In Texas, to no one’s surprise, Obama appointee Nelva Gonzalez Ramos of the federal district court in Corpus Christi issued an injunction against the state’s voter-ID law despite the fact that it was successfully implemented in state elections in 2013 with none of the problems predicted by its opponents. As opposed to suppressing anyone’s vote, 2013 voter turnout actually went up compared to 2011 levels. This held true throughout the state, including its heavily minority counties.

Ramos made the remarkably illogical claim that, although Texas offers a free ID to anyone who doesn’t have one, the ID requirement still amounts to a prohibited poll tax. Her decision is an outlier. Federal district courts in other states including in Arizona, Georgia, Indiana, South Carolina, and Tennessee have concluded that an ID requirement is neither discriminatory nor a poll tax.

Fortunately, on Oct. 14, a three-judge panel of the Fifth Circuit Court of Appeals dissolved the Ramos injunction “based primarily on the extremely fast-approaching election date.” In other words, with Ramos issuing her opinion only nine days before early voting started and just 24 days before Election Day, the injunction “substantially disturbs” the election process. As Judge Edith Brown Clement said, the “Supreme Court has repeatedly instructed courts to carefully consider the importance of preserving the status quo on the eve of an election.” Otherwise, court orders affecting elections “especially conflicting orders, can themselves result in voter confusion and consequent incentive to remain away from the polls. As an election draws closer, that risk will increase.”

The NAACP filed an emergency petition with the Supreme Court to overturn the Fifth Circuit and restore the injunction. But on Saturday, Oct. 18, the Supreme Court rejected the petition and refused to overrule the Fifth Circuit. Curiously, Justice Breyer did not join the dissent filed by Justices Ginsburg, Kagan and Sotomayor. So Texas’s voter-ID requirement will remain in place for this year’s election.

Finally, on Oct. 16, the Arkansas state supreme court threw out that state’s voter-ID law, concluding that it violated the state constitution. The court held that voter ID is an additional “qualification” on voters that can be implemented only if the requirement is placed in the state constitution. Other state supreme courts have concluded that voter ID is just a way of verifying that a state resident meets the eligibility requirement to be a qualified voter — it is not a new qualification. Since this is a state constitutional issue, there is no basis for an appeal to the U.S. Supreme Court. Thus, the law will not be in effect in Arkansas in the election, but the state legislature may be able to implement a voter-ID requirement if the Arkansas constitution is amended.

These are the last major cases affecting the upcoming election. But given the Left’s penchant for litigating elections instead of trying to win them with the best candidate, who knows? We may yet see another flurry of new lawsuits filed before Nov. 4.