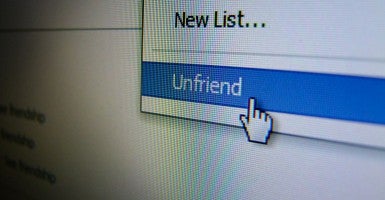 The behavior of consistent liberals and consistent conservatives is the topic of a Pew study. (Photo: Oli Dunkley/Creative Commons)

If you’ve sensed over the years that your liberal friends are “unfriending” you on Facebook, you might be right.

A new Pew Research study concludes that “consistent liberals” are the most likely ideological group in America to block or defriend someone else because they disagree with that person’s politics.

“Roughly four-in-10 consistent liberals on Facebook have blocked or defriended someone because they disagreed with something that person posted about politics,”  write the authors of the study, titled “Political Polarization and Media Habits.”

“This compares with 31 percent of consistent conservatives and just 26 percent of all Facebook users who have done the same,” they add.

The analysis, released yesterday, is part of Pew’s yearlong effort to explain political polarization in America.

The study also finds that liberals are the most likely ideological group to end a personal friendship because of politics.

“Roughly a quarter (24 percent) have done so, compared with 16 percent of consistent conservatives and around 10 percent of those with more mixed political views,”   authors Amy Mitchell, Jeffrey Gottfried, Jocelyn Kiley and Katerina Eva Matsa write.

Despite the differences, there is some common ground. Both consistent liberals and consistent conservatives—which Pew says accounts for about 20 percent of the American public—are more likely to closely follow government and political news.

“[They] are more likely to drive political discussion—that is—others turn to them, they lead rather than listen, and they talk about politics more overall,” the study concludes.

Where liberals and conservatives get their news is diverse, although notably 47 percent of conservatives cite Fox News Channel as their main news source for government and politics. Liberals are more splintered, citing a variety of outlets including National Public Radio and the New York Times.

Today, the authors say, “it is virtually impossible to live in an ideological bubble [and] … many consistent conservatives and liberals hear dissenting political views in their everyday lives.”

So, if you fall into one of those “consistent” categories, defriending someone might not stop you from hearing the other side.  It might, however, satisfy something else.

The study, “Political Polarization and Media Habits,” is based on an online survey conducted earlier this year with 2,901 participants recruited in a telephone survey of 10,013 adults. For more findings, see the infographic and read the complete analysis here.