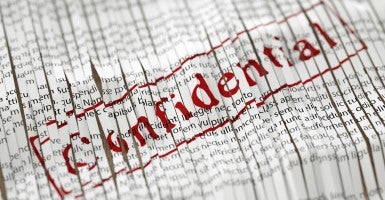 Lost and missing government records are not isolated to one administration or political party. The list below includes 19 examples of public files that went missing, were withheld or lost and then found. It includes the most recent example of former Deputy Assistant Secretary of State Raymond Maxwell’s account of Benghazi documents, which The Daily Signal revealed last month.

1) Missing: Hillary Clinton S&L Records. In 1988, according to congressional investigators, Hillary Clinton “ordered the destruction of records relating to her [legal] representation of [Jim] McDougal’s Madison S&L” when federal regulators were investigating the insolvency of the Arkansas savings and loan. Bill Clinton was Arkansas governor at the time.

4) Missing: Hillary Clinton Law Firm Records. In 1996, after nearly two years of searches and subpoenas, the White House reported it found copies of missing documents from Hillary Rodham Clinton’s law firm that described her work for Madison S&L in the 1980s. The White House previously said it did not have the records. The originals have not turned up.

7) Missing: Bush Administration ‘Torture’ Documents. In 2004, critics of the Bush administration’s “enhanced interrogation techniques” for suspected terrorists, which they regarded as torture, said key documents were missing from newly declassified White House materials regarding torture and other mistreatment of prisoners. These included memos to and from the FBI and CIA, and documents dated after April 2003.

8) Missing: Millions of Bush Administration Emails. In 2005, the White House discovered some emails were not properly archived. It later was revealed that missing emails from Jan. 3, 2003, to July 28, 2005, might total 5 million.

9) Lost and Found: Katrina Conference Call Transcript. Also in 2005, Bush administration officials told Congress that they could not locate a transcript of an Aug. 29 videoconference call about Hurricane Katrina. Officials produced a transcript in 2006.

10) Missing: Bush Administration’s Abramoff Emails. In 2006, Special Counsel Patrick Fitzgerald found that missing emails from the 2003 period could be relevant to the criminal probe into influence peddling by lobbyist Jack Abramoff, who later was convicted of bribery and corruption.

11) Missing: Bush Administration Political Emails. In 2007, it was revealed that 88 White House officials used Republican National Committee email accounts — but that the RNC preserved no emails for 51 of the officials.

12) Missing: Bush Administration Interrogation Video. Also in 2007, it was discovered that the Pentagon had lost a crucial recording of an al-Qaeda operative being interrogated in a U.S. military brig.

13) Withheld: Obama Administration ‘Fast and Furious’ Documents. In 2012, Attorney General Eric Holder withheld emails regarding the “Fast and Furious” scandal. President Obama invoked executive privilege to prevent some emails from being turned over to Congress under subpoena.

14) Missing: Obama State Department Records. This year, it was revealed that the State Department may have lost some $6 billion because of incomplete or missing contract records over six years, mainly during Hillary Clinton’s tenure as secretary of state.

16) Missing: Obama HealthCare.gov Records. Also this year, the Obama administration revealed that records Congress is seeks in its investigation of the Obamacare website, HealthCare.gov, are missing.

17) Missing: Obama EPA Records. Also this year, the Environmental Protection Agency told Congress it was having trouble finding emails relevant to a probe into the environmental impact of a proposed gold and copper mine in the Bristol Bay watershed in Alaska. In a separate case, a federal judge found that the EPA willfully failed to keep emails and other records relevant to a Freedom of Information Act request regarding the delay of unpopular regulations until after the 2012 election.

19) Missing: Obama EPA Text Messages. Last week, the Environmental Protection Agency said it didn’t save text messages at issue in a Freedom of Information case seeking records about the agency’s plans to crack down on coal power plants. An EPA spokesman contends that federal law doesn’t require the messages to be retained.