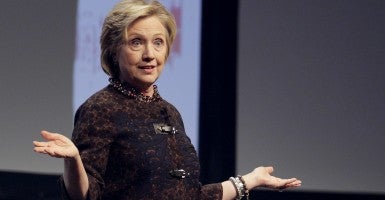 To Sonya Gilliam, a recent account of improper sorting of Benghazi-related documents  at the State Department brought back vivid memories of her own encounters with high-level government officials who withheld, deleted or destroyed public records.

And one name stood out for its familiarity: Cheryl Mills.

A former deputy assistant secretary of state had told The Daily Signal that Mills was present during an after-hours document operation in a basement room of the State Department in October 2012. Mills was chief of staff to then-Secretary of State Hillary Clinton. The purpose of the session, former State Department official Raymond Maxwell said, was to “separate” documents damaging to Clinton before records were turned over to an independent review board probing the Sept. 11, 2012 terrorist attacks on the U.S. mission in Benghazi, Libya. “My stomach dropped,” Gilliam says about hearing the allegation last month that Mills was involved in Benghazi document sorting:

I said to myself, oh my gosh, here we are, 14 or 15 years later, [and] Cheryl Mills is still in charge of document ‘production’—I’ll use that term loosely.

Gilliam, now retired, was responsible for Commerce Department responses to Freedom of Information Act requests during the Clinton administration.

Back then, Mills was deputy White House counsel to President Clinton. At the time, multiple probes sought to determine whether the administration was fundraising illegally by selling seats on Commerce Department trade missions.

Gilliam says she sat through countless task force meetings convened to respond to demands that began in 1994 for relevant records under FOIA requests and, later, from Congress, grand juries and news media.

“Meantime, the clock is ticking and it’s illegal to not respond according to the law within the time frame,” Gilliam told The Daily Signal in an interview.

Gilliam says that supervising attorneys at the Commerce Department told her, “We’re waiting on Cheryl Mills.”

“I said, ‘Who is Cheryl Mills?’ ‘Oh, she is the deputy counsel to the president.’

“I about dropped my jaw. I said, ‘What are documents doing over with Cheryl Mills?’ ”

Gilliam says the answer was that the document release by Commerce had to be “coordinated” with the White House.

I found many, many references that I have highlighted in those meetings that we had that said ‘waiting on White House,’ ‘call Cheryl Mills,’ ‘Cheryl Mills has not responded yet,’ ‘Cheryl says no.’

Gilliam logged more than 30 years as an award-winning public servant working for Democratic and Republican administrations. Before the Clinton administration, Gilliam says, it had not been common practice to send non-White House documents to the White House for approval of their release.

“I was amazed and just really gobsmacked when I saw the White House involved to the extent it was,” Gilliam says.

‘Con Artists’ and ‘Hooligans’ at Commerce

Two years into the investigations, on April 3, 1996, Commerce Secretary Ron Brown and 34 others were killed in a plane crash while on an official trade mission in Croatia. Brown recently had been served with a deposition notice regarding the alleged sale of trade mission seats.

Evidence revealed a “flurry of document shredding in the [Commerce] secretary’s office” following his death. The document obstruction, which continued for years, is detailed in a 1998 federal court ruling.

District Judge Royce C. Lamberth likened the behavior of Commerce Department officials to “con artists” and “hooligans.” He found that they “wrongfully withheld documents, destroyed documents, and removed or allowed the removal of others, all with the apparent intention of thwarting the FOIA and [court] orders.”

Gilliam says she was so disturbed by what she saw that she blew the whistle in 2000 on behalf of the conservative watchdog group Judicial Watch, which was suing Commerce for the documents.

I know that Ms. Mills, in her position as deputy counsel to the president, advised Commerce officials to withhold certain documents … these interactions with Ms. Mills, as well as other practices, delayed and corrupted the Commerce Department’s response to Judicial Watch’s FOIA requests.

Mills, now on the board of directors at the global investment firm BlackRock, declined comment for this report.

Lamberth’s opinion faulting the Commerce Department for obstruction did not name Mills as personally responsible for any misdeeds.

In a separate case involving missing documents that was brought against the FBI in 1997, Lamberth found no obstruction or conspiracy but referred to Mills’ conduct as a White House official as “loathsome.”

Lamberth faulted Mills for making “the most critical error in this entire fiasco”: learning of missing White House emails but not taking proper steps to resolve the situation. Judging by the frequency of cases over the years, up to and including the IRS scandal, lost and missing federal records amount to an epidemic — one not isolated to one administration or party.

Typically, even when obstruction is discovered, the remedy is that an agency turns over any recovered documents. The agency may be ordered to pay a successful plaintiff’s litigation costs. The process provides little disincentive to repeating incompetent or willful behavior.

‘I Am Ray Maxwell’

In the case where Gilliam blew the whistle, the Commerce Department ultimately acknowledged wrongdoing and taxpayers paid the bill: The agency was ordered to pay Judicial Watch $897,000 in legal fees. Some documents never were recovered.

The outcome was little consolation, Gilliam says. She says she suffered recrimination and health issues as a result of stepping forward in 2000.

And she gives Maxwell a great deal of credit for speaking up about what he saw in the State Department basement in October 2012.

“I never met Ray Maxwell,” Gilliam told The Daily Signal.  “I don’t know Ray Maxwell. But I am Ray Maxwell because I lived Ray Maxwell’s story. And I felt compelled to say something.”

A Medley of Missing Documents Through the Years:

Missing: Hillary Clinton S&L Records. In 1988, according to congressional investigators, Hillary Clinton “ordered the destruction of records relating to her [legal] representation of [Jim] McDougal’s Madison S&L” when federal regulators were investigating the insolvency of the Arkansas savings and loan. Bill Clinton was Arkansas governor at the time.

Missing: Hillary Clinton Law Firm Records. In 1996, after nearly two years of searches and subpoenas, the White House reported it found copies of missing documents from Hillary Rodham Clinton’s law firm that described her work for Madison S&L in the 1980s. The White House previously said it did not have the records. The originals have not turned up.

Missing: Bush Administration ‘Torture’ Documents. In 2004, critics of the Bush administration’s “enhanced interrogation techniques” for suspected terrorists, which they regarded as torture, said key documents were missing from newly declassified White House materials regarding torture and other mistreatment of prisoners. These included memos to and from the FBI and CIA, and documents dated after April 2003.

Missing: Millions of Bush Administration Emails. In 2005, the White House discovered some emails were not properly archived. It later was revealed that missing emails from Jan. 3, 2003 to July 28, 2005 might total 5 million.

Lost and Found: Katrina Conference Call Transcript. Also in 2005, Bush administration officials told Congress that they could not locate a transcript of an Aug. 29 videoconference call about Hurricane Katrina. Officials produced a transcript in 2006.

Missing: Bush Administration’s Abramoff Emails. In 2006, Special Counsel Patrick Fitzgerald found that missing emails from the 2003 period could be relevant to the criminal probe into influence peddling by lobbyist Jack Abramoff, who later was convicted of bribery and corruption.

Missing: Bush Administration Political Emails. In 2007, it was revealed that 88 White House officials used Republican National Committee email accounts — but that the RNC preserved no emails for 51 of the officials.

Missing: Bush Administration Interrogation Video. Also in 2007, it was discovered that the Pentagon had lost a crucial recording of an al-Qaeda operative being interrogated in a U.S. military brig.

Withheld: Obama Administration ‘Fast and Furious’ Documents. In 2012, Attorney General Eric Holder withheld emails regarding the “Fast and Furious “scandal.  President Obama invoked executive privilege to prevent some emails from being turned over to Congress under subpoena.

Missing: Obama State Department Records. This year, it was revealed that the State Department may have lost some $6 billion because of incomplete or missing contract records over six years, mainly during Hillary Clinton’s tenure as secretary of state.

Missing: Obama HealthCare.gov Records. Also this year, the Obama administration revealed that records Congress is seeks in its investigation of the Obamacare website, HealthCare.gov, are missing.

Missing: Obama EPA Records. Also this year, the Environmental Protection Agency told Congress it was having trouble finding emails relevant to a probe into the environmental impact of a proposed gold and copper mine in the Bristol Bay watershed in Alaska. In a separate case, a federal judge found that the EPA willfully failed to keep emails and other records relevant to a Freedom of Information Act request regarding the delay of unpopular regulations until after the 2012 election.

Missing: Obama EPA Text Messages. Last week, the Environmental Protection Agency said it didn’t save text messages at issue in a Freedom of Information case seeking records about the agency’s plans to crack down on coal power plants. An EPA spokesman contends that federal law doesn’t require the messages to be retained.