Hong Kong’s Former No. 2 Official Fields 7 Questions on the Future of Her City 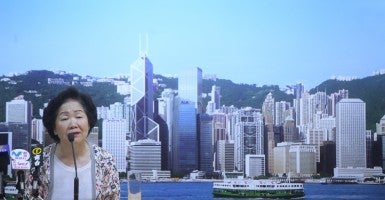 As the number of pro-democracy demonstrators in Hong Kong dwindles, one of the city’s veteran leaders is a key figure in seeking a compromise with the pro-Beijing camp on how to elect a new chief executive.

“It is imperative that the Hong Kong government offer some concession–and a significant one–that can convince the die-hards in the movement that their protest action has not been totally in vain,” Anson Chan, Hong Kong’s former chief secretary, told The Daily Signal in an online interview.

Hong Kong’s government and student groups leading the protests, which began Sept. 28, agreed to begin talks Friday on the future of democracy in the city.

Demonstrators have demanded the resignation of Leung Chun-ying, the current chief executive, or top city leader,  and insisted on the democratic election of his successors as well as all lawmakers. This would allow voters, not a committee aligned with Communist leadership in China, to pick candidates.

“It is clear that these demands are unrealistic and will not be met, at least in the short term,” said Chan, 74, who oversaw the civil service as Hong Kong’s second-highest official under British rule and stayed on to lead the transition to Chinese control.

In the Q&A below, she recommends how the two sides can find common ground, lashes out at Britain’s weak response to the protests, and describes how the democracy fight in “little Hong Kong” is a concern for the world.

The Daily Signal: What do you make of the violence that engulfed protest camps last week? Is Beijing activating gangs of criminals known as triads?

Chan: It cannot be stressed too strongly that the protests have been remarkably peaceful given the numbers involved, the duration and inclement weather conditions ranging from blistering heat to thunderstorms and torrential downpours. There has been no looting, no vandalism, no damage to property or vehicles. The protesters have cleaned up after themselves, sorted rubbish for recycling and even offered police officers protection from the rain with their umbrellas.

The attacks on the protest camps have clearly been orchestrated, including by criminal “triad” gangs, but it is hard to see what Beijing would gain by colluding with such action less than 24 hours after Chief Executive C.Y. Leung was forced to agree to direct discussions with the protest leaders. I am certain that Beijing does not want to see a violent end to the current standoff in full view of the world’s media.

Q: What does Beijing fear about Hong Kong’s ambition for democracy?

A: Beijing is afraid that unless they keep a tight hold on the nomination process there is a risk that Hong Kong people will elect someone as chief executive who will oppose the central government and possibly even press for independence.

Moderates in the pro-democracy camp, including myself, have persistently argued that Hong Kong people can be trusted to exercise their vote sensibly and will not elect someone who cannot work with Beijing, but this is a risk they are currently not prepared to take.

In the wider context, the central government [of China] fears that allowing democratic government  in Hong Kong may fuel further unrest in its turbulent autonomous regions of Xinjiang and Tibet, hence the constant reminder that the pace of democratization in Hong Kong must take account of China’s national security and development interests. 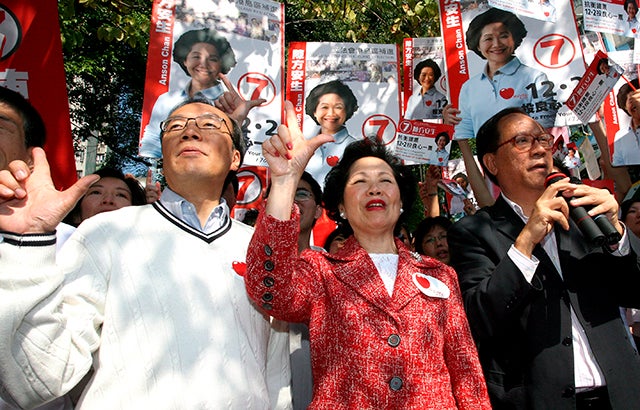 With her group Hong Kong 2020 Anson Chan has been at the center of the city’s fight for democracy. (Photo: Newscom)

Q: How would you analyze the strategy of the protesters?

A: The protesters have been firmly united in their goal to achieve genuinely democratic elections for the next chief executive in 2017 and all legislators no later than 2020.

The spontaneous nature and speed of escalation of the protests took everyone by surprise, including the organizers of the original “Occupy Central’ campaign, which has now been subsumed within the much wider Occupation Movement.

>>>‘We Have a Place in This World’: Hong Kong-Born Merchant Stays Connected to Freedom Fight

I think it is vital that the political parties unite to try to bring together the various groups and agree on a strategy for winding down the protests peacefully.

Q: Could Hong Kong’s business tycoons, considering their connections to Beijing, help broker concessions that might end the impasse?

Unfortunately, they do not see it as being in their wider interests to broker the sort of concessions the protesters are demanding–such as abolition of the functional constituency system of election, which enables them to wield a disproportionate influence on the workings of the legislature and election of the chief executive.

Q: If neither of the protesters’ demands are met–removal of C.Y. Leung as chief executive and democratic election of his successor without vetting by Beijing–what does winning look like for the protesters?

A: It is clear that these demands are unrealistic and will not be met, at least in the short term.

“It is clear” that protestors’ basic demands will not be immediately met, says Anson Chan.

It is therefore imperative that the Hong Kong government offer some concession–and a significant one–that can convince the diehards in the movement that their protest action has not been totally in vain.

Specifically, the government must make clear exactly how much scope there is, within the parameters of the Aug. 31 NPCSC [National People’s Congress Standing Committee] decision [to require vetting of chief executive candidates by a Beijing-influenced nominating committee], to reform the composition of the future nominating committee to make it more genuinely representative of the Hong Kong community and thus more likely to nominate candidates from a range of political backgrounds.

My group, Hong Kong 2020, has advocated measures to improve the composition of the nominating committee and ensure that the nominating process for candidates follows democratic procedures as required by Article 45 of the Basic Law.

Q: How has Hong Kong’s future turned out differently from what you imagined in 1997 in helping with the handover from Britain to China?

A: In the years leading up to and immediately following the return of sovereignty, I travelled the world in my capacity as head of the Hong Kong Civil Service, lobbying for the support of the international community for the Joint Declaration [the transfer of control to China from Britain].

I was confident that the terms of this internationally binding treaty would be honored by both signatories and sincerely believed that the Joint Declaration and our mini-constitution–the Basic Law–offered the people of Hong Kong a bright and stable future under “one country, two systems.”

I am shocked that, only 17 years after the handover, we are witnessing a concerted attack on the concept of “one country, two systems” by Beijing and its united front affiliates in Hong Kong.

Anson Chan is “shocked” that Beijing is interfering with Hong Kong’s “one country, two systems” concept.

The Central People’s Government’s liaison office in Hong Kong now blatantly interferes in matters which should be the sole concern of the Hong Kong government.

>>>The View From China on Hong Kong’s Massive Demonstrations

This is why the Hong Kong public has no faith in a future nominating committee, which we foresee will be equally vulnerable to Central [People’s] Government manipulation.

Freedom of the press is now being systematically eroded by self-censorship and the sacking of outspoken writers, columnists and broadcasters. 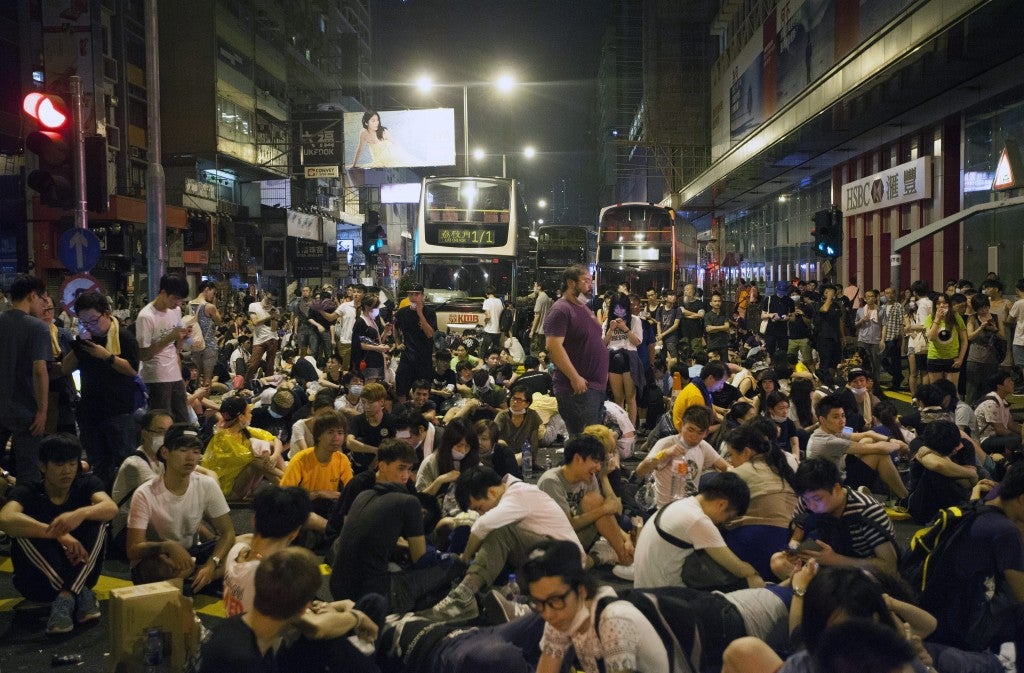 Turnout at demonstrations in Hong Kong is dwindling since this Sept. 29 photo was taken. (Photo: Newscom)

Almost all of Hong Kong’s major Chinese language newspapers, radio and TV stations are now owned by pro-Beijing tycoons who do not want to offend Beijing.

The reputation of our police force and world-leading anti-corruption agency–the Independent Commission Against Corruption–are being tarnished by suspicions that their missions have been politicized.

I am also deeply disappointed at the failure of the British government to speak up in defense of the terms of the treaty they signed, even when its terms are so clearly being undermined.

It seems the lure of trade agreements with China is trumping its legal and moral responsibilities to Hong Kong.

Q: Why should the international community care about what’s happening in Hong Kong?

A: Under the policy of “one country, two systems,” Hong Kong is unique among cities in China in terms of our adherence to the rule of law, the rights and freedoms enjoyed by citizens, a largely corruption-free civil service and a level playing field for business.

As a result, many countries have huge stakes in our city’s future both in its own right and as a gateway to business and investment in mainland China.

The terms of the Joint Declaration and the Basic Law enable Hong Kong to have a swath of bilateral relationships in its own right.  For example:

In short, the international community has a big stake in little Hong Kong–all of which hangs fundamentally on faithful implementation of the Joint Declaration, the Basic Law and the policy of “one country, two systems,” including strict adherence to the rule of law and independence of the judiciary.

It is important that world leaders lend whatever support they can to the safeguarding of Hong Kong’s current status.  This is not interference; it is prudent concern for the protection of their interests.