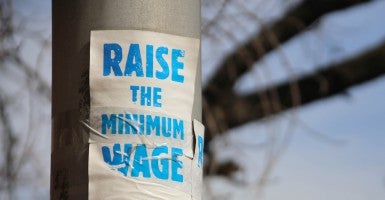 LAWRENCEVILLE, N.J.—As far as Rob Pluta is concerned, New Jersey lawmakers who say they want to help restaurant workers by raising the state’s minimum wage for tipped employees have it all wrong.

If Trenton wants to help these workers, says Pluta, who owns and operates Leonardo’s II, an Italian eatery in Lawrenceville, it needs to promote the state, not enact even more mandates.

There is Revolutionary War history everywhere around Lawrenceville, population about 4,000. It’s not too far from Trenton, where Gen. George Washington launched his famous Christmas night surprise attack on Hessian soldiers garrisoned there. The Battle of Trenton and Battle of Princeton were fought during the “Ten Crucial Days” that reinvigorated the colonists and to this day are the subject of elaborate re-enactments during the Christmas season.

“There’s so much rich history here and so much potential for our business community,” says Pluta. “But the price of doing business keeps going up, and it makes New Jersey less competitive than it should be with neighboring states.”

But he’s even more concerned about legislation introduced by Assemblywoman Shavonda Sumter, D-Paterson. Sumter’s bill, A857, which passed in the Assembly’s Labor Committee on a party-line vote last March, calls for an increase in the minimum wage for tipped workers. It would increase the federal minimum of $2.13 per hour to $3.39 by the end of this year and $5.93 by 2016.

For restaurant owners, that’s even worse than it sounds, Pluta says. Under current law, if employees don’t make $8.25 counting tips and base, the employer makes up the rest. Pluta says he’s never had to pay—his employees routinely make $15 to $20 per hour or more.

If this legislation passes—a companion bill in the state Senate has not moved, and it’s unclear if Republican Gov. Chris Christie would sign it if it did reach his desk—Pluta would have to pay out up to $24,000 more per year, plus payroll taxes. His employees, however, would see little difference in their paychecks.

Sumter told The Daily Signal she is sensitive to the concerns of businesses, but other factors must be considered. She says waiters usually must share tips with bartenders and other employees. Women, she notes, make up a large percentage of this group. Assemblywoman Shavonda Sumter wants an increase in the minimum wage for tipped workers from the federal minimum of $2.13 per hour to $3.39 by the end of this year. (Photo: New Jersey Assembly Majority Office)

“We haven’t touched this rate for tipped workers for over 20 years now,” she says. “This is a high-cost state and many of the tipped workers have to be in two or three jobs just to make ends meet.”

Sumter says she told members of the restaurant industry in April that the current minimum wage was only enough for tipped employees to cover their taxes and that the business leaders “said they didn’t realize this.”

Pluta’s customers understand what this will mean. Kevin and Eve Connelly are regulars. They like to order a shrimp platter with cocktail sauce. It’s not on the menu and is supplied only by request.

“If the restaurant suddenly has to pay for something it didn’t have to pay before, one way to cover that cost is to raise menu prices,” Kevin Connelly says. “So we are probably going to have to pay more for that shrimp.”

And that, says Eve Connelly, will have a ripple effect. Higher prices mean people go out less often, which means less in tips for the wait staff at Leonardo’s II. “I wonder if this is something the politicians understand,” she says. Jon McMahon, who owns a special-events concession company in northern New Jersey, says this helps his competitive situation. He has to pay more than the minimum wage anyway because of the type of business he has and the type of employees he needs. This forces his competitors to match his labor costs and him to charge more.

“I’m glad to pay more for people with experience who fit into my business plan and to share this cost with my customers,” he says. “There’s no question that capitalism is under attack. But this is still America, and this is still the land of opportunity for people who are willing to innovate. It’s up to you to take care of your business. So think differently, innovate and stay one step ahead.”

It’s not that simple, Pluta says.

“What I keep trying to drive home is that we are forced into paying costs we never had to cover before in addition to the minimum wage increase that is already in motion,” he says. “This will cripple the restaurant industry. This is especially true for start-ups and other borderline businesses operating at the margins.”

The Death of Neighborhood Bars?

T.C. Nelson, who owns the Trenton Social on South Broad Street in Trenton, told The Daily Signal the winners will be chain restaurants, which “have the economy of scale to absorb these costs.” The losers, Nelson says, will be neighborhood bars that can’t survive the extra expense. “What this proposal does is take the art of service and hospitality out of the hands of the small business,” he says. “Right now, it’s hard to know how much this will cost. But you can be sure some of the smaller, local neighborhood places will go under.”

He also agrees the area should do more with its history.

“There is so much untapped potential here given where we sit between Philadelphia and New York,” he says. “I’m glad we have the re-enactments, but we could be doing so much more with our history.”

Pluta is not optimistic.

“This is an easy issue to demagogue,” he says. “If this bill does go through it will mean higher consumer costs and less business in restaurants, which works to the disadvantage of the very workers the politicians say they are trying to help.”