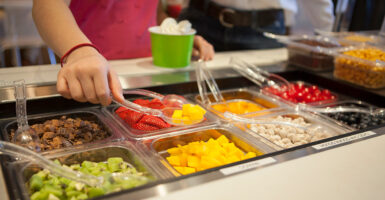 Hornsby owns a frozen yogurt shop, a business he built from the ground up in 2013, in a small city in northwest Georgia.

With the exception of the manager and a few other employees, Hornsby employs primarily high school students. While he enjoys being able to provide so many young people with what is often their first job, he says he simply couldn’t afford to pay all his employees $15 an hour.

More than doubling the minimum wage over four years from the current $7.25 an hour is “not logical,” Hornsby told The Daily Signal in a recent phone interview. But even beyond the negative financial implications of a large minimum wage increase, “it’s maddening that Big Brother would tell me how to run my business,” he said.

If given the opportunity, the shop owner said, he would like to sit down with the lawmakers who are advocating a federal $15 an hour minimum wage and ask how they think “doubling the minimum wage will work … not just for my business, but [for] every shoe store, every fast-food place” in the country?

Simply increasing product prices is not something that Hornsby views as a viable option.

“I can’t just raise my prices equal to what the [wage] increase is, because I will lose too many customers. There is no doubt about it,” Hornsby, 54, said.

Hornsby says he starts his employees at $7.50 an hour, or sometimes a little higher, and will often raise an employee’s hourly wage as his or her skills increase and they prove to be hard workers.

“I am all about rewarding people [and] incentivizing people, but [a federal $15 minimum wage] is the complete opposite of that,” he said.

If, within the next few years, Hornsby had to pay all his employees at least $15 an hour, staff hours would likely have to be cut, some employees would be laid off, and the prices of his product would have to increase significantly, he said.

The shop offers 21 frozen yogurt flavors and more than 70 toppings. Right now, Hornsby charges customers 56 cents per ounce, and says raising his prices has always been a carefully calculated process. Every nine to 12 months, he usually raises the cost of his product by 1 cent or 2 cents per ounce, adding that he never wants to raise his prices so much that customers won’t come back.

If the minimum wage were double what he pays many of his employees now, his payroll cost would increase by 30% to 40%, and he would have “to raise prices not just 1 [cent] or 2 [cents] but 10 or 15 [cents an ounce],” he estimated.

Hornsby says he takes no issue with individuals who are trying to feed a family being paid a little more, but he finds it frustrating that the proposed minimum wage hike would be applied to high school students and single moms alike.

President Joe Biden told CBS News that he does not think an amendment to increase the minimum wage to $15 an hour is “going to survive” within his $1.9 trillion stimulus package being considered in Congress, but Sen. Bernie Sanders, I-Vt., has continued to lobby for the wage hike.

“People on top are doing phenomenally well, yet we have literally tens of millions of Americans working for starvation wages,” Sanders said during a CNN interview Sunday. “You cannot make it in any state in this country on 9 or 10 bucks an hour. You’ve got to raise that minimum wage to 15 bucks an hour.”

The question Hornsby said he would like answered is, how many workers are actually trying to support themselves or their families with only a minimum wage job? Not many, according to Heritage Foundation fellow Rachel Greszler, whose research and writing are focused on economics, the federal budget, and entitlements.

Using 2016 data, the U.S. Government Accountability Office found that out of America’s 163 million workers, only about 222,000 are single parents earning the minimum wage or less, Greszler told The Daily Signal in an email.

According to the U.S. Bureau of Labor Statistics, “as of 2018, the median hourly wage rate was $18.58, and 82 million U.S. workers (16 and older) were paid hourly rates,” she said, adding that among those hourly wage earners in America, 2.1% earn at or below the current federal minimum wage of $7.25.

In an effort to protect his business, and thousands of other small businesses across America, Hornsby has been reaching out to his elected officials to share his story and asking them to consider the negative implications of a federal $15 minimum wage.

It’s easy to “feel pretty darn hopeless,” he said, adding that, for Biden, it’s just getting out “his pen” to sign into law a $15 minimum wage, but for him, it could mean “the loss of the business I have been building for eight years.”