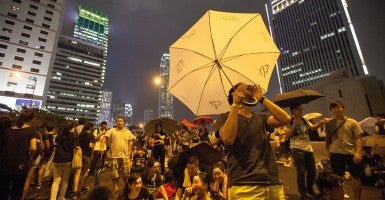 As protesters in Hong Kong continue their demands for greater democracy, China’s Communist government is restricting media coverage of the events to the rest of the country.

According to the Associated Press, coverage of the Hong Kong protests has been limited in mainland China to TV anchors reading brief statements with no video and text reports with no photos.

The China Media Project found that only nine articles in Chinese newspapers were written Tuesday about the Hong Kong protests, with most running an article by the official Xinhua news service that described the “recklessness” of the protestors.

Words such as “tear gas,” “Hong Kong,” “barricades” and “Occupy Central” were either blocked or severely censored on Chinese microblogs.

Also Tuesday, the police detained Wang Long, an activist in Shenzhen, after he forwarded news about the protests on social media.

The Hong Kong protests started Friday when students took to the streets to demand greater democracy.

The protesters want the right to elect the city’s leader, or chief executive, without procedural limits that would make it so only Beijing’s preferred candidates make the ballot.