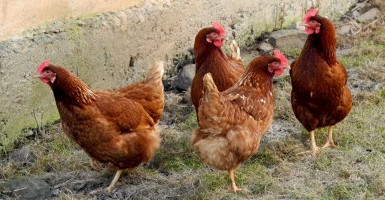 In his first official faceoff with Republican Joni Ernst last night, Braley found himself in an uncomfortable situation when asked about reports that he threatened to sue his neighbor over chickens that had wandered onto his lawn.

“Congressman, you threatened to sue a neighbor over chickens that came onto your property. You’re talking about bipartisanship—how do we expect as Iowans that you will work across the aisle when you can’t walk across your yard?”

“It’s just not true, I never threatened to sue anyone,” Braley responded.

Iowa features one of the closest U.S. Senate races in the country, pinning Braley, a four-term congressman from Waterloo, against Joni Ernst, an Iowa state senator.

Braley, who received a law degree from the University of Iowa, admitted that he issued a formal complaint against his neighbor, but continues to deny that he threatened a lawsuit.

According to The Washington Post, Braley emailed a lawyer for his neighborhood board of directors demanding action against the neighbor to “avoid a litigious situation.” But chickens weren’t the only source of contention at last night’s debate held at Simpson College in Indianola. Braley attacked Ernst for supporting a “radical Tea Party agenda that’s going to take us backwards,” while Ernst took issue with Braley’s support for Obamacare.

Braley, 56, also criticized Ernst, 44, for connections to the Koch brothers, billionaires who support libertarian and conservative-minded candidates. Ernst shot back, accusing Braley of being a hypocrite.

“Congressman Braley, you’re not running against these other people, you’re running against me,” Ernst said. “I am a mother, I am a soldier and I am an independent leader. You are being funded by Tom Steyer, who is a California billionaire extreme environmentalist.”

Watch the video for the heated exchange.