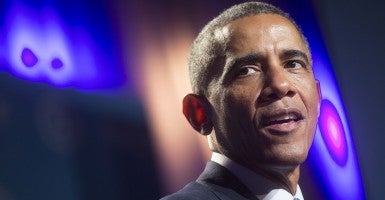 Despite the challenges of a growing terrorist threat, the Obama administration has decided now is the right time to allow illegal immigrants to join the military.

While the administration is juggling the assembly of an international coalition to degrade and destroy ISIS and its affiliates and identifying the 100-plus American passport holders and the 3000-plus European passport holders who have joined ISIS, the administration—for the first time ever–will allow illegal aliens to join the U.S. military through a pilot program named the Military Accessions Vital to National Interest  (MAVNI).

The MAVNI program authorizes the secretary of defense to “recruit certain legal aliens whose skills are considered to be vital to the national interest.” It is mainly directed at those holding critical skills, such as “physicians, nurses, and certain experts in language with associated cultural backgrounds.” According to the Defense Department website, the “limited pilot program will recruit up to 1,500 people per year, and will continue through September 30, 2014.”

Those former illegal aliens became “eligible” to join the military because of the Obama administration executive amnesty program known as Deferred Action for Childhood Arrivals (DACA). The DACA program is, as Heritage scholars have written here, unjust, costly and acts as an incentive for more illegal immigration.

DACA purports to set prosecutorial priorities and grant relief to each individual who (1) came to the United States under the age of 16; (2) continuously resided in the U.S. for at least five years before June 15, 2012; (3) is currently in school, has graduated from high school, has a GED, or is an honorably discharged veteran; (4) has not been convicted of a felony, significant misdemeanor or multiple misdemeanors or otherwise poses a threat; and (5) is not above the age of 30. Recall that the patriotic-sounding ENLIST Act (Encourage New Legalized Immigrants to Start Training Act), proposed earlier this year, failed to become law. That act would have given lawful permanent residence status to illegal aliens in exchange for honorable military service. Since that form of back door citizenship did not become law, the administration has simply created an ENLIST Act workaround–a two-step executive amnesty process: (1) get into DACA, and (2) then get into the U.S. military via MAVNI.

And just who has been granted DACA status?

As of June 2014, according to the U.S. Citizenship and Immigration Services, 1,423 citizens from Pakistan have been granted executive amnesty through DACA. Furthermore, the administration has approved 449,921 Mexican citizens and tens of thousands of others from at least 18 different countries.

This news comes the same week the Justice Department convicted Sohiel Kabir of terrorism. An Afghan-born, naturalized U.S. citizen who served in the U.S. Air Force, Kabir was charged with providing material support to terrorists by making arrangements to join al-Qaeda and other related charges. He faces life in prison when sentenced.

All of this is happening at a time when the threat of international terrorism is on the rise, and the military is downsizing. In fact, according to American Enterprise Institute defense expert Mackenzie Eaglen, the active-duty Army has declined 21 percent from a post-9/11 wartime high of 570,000 down to 450,000 soldiers, and could go as low as 420,000 if current funding levels continue.

Our country has benefited from the honorable military service of millions of men and women, including some who were allowed to serve even though they were not citizens. To them, we owe a debt of gratitude. But this scheme is different, and given the times and means, difficult to justify.

This article has been modified to correct the name for this program,  Military Accessions Vital to National Interest.