Instead of Protesting, Climate Marchers Should Read This 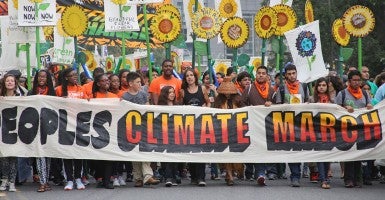 More than 310,000 people took to the streets of New York City to call for climate action. (Photo: Newscom)

World leaders will gather for the United Nations climate summit this week after tens of thousands of protestors marched through Manhattan on Sunday urging action on climate change. Their time would have been better spent reading Steven Koonin’s Wall Street Journal piece, “Climate Science is Not Settled.”

Before you go labeling Koonin a climate denier, check out his resume. He served as the undersecretary of science for the Department of Energy during President Obama’s first term. He’s a theoretical physicist and the director of the Center for Urban Science and Progress at New York University. And his message is clear and straightforward: Yes, the climate is changing as it always has. But the science is far from settled, and there’s great uncertainty into all that goes into a changing climate. Climate models have serious limitations, and we’re nowhere near understanding variations in the climate enough to make sound policy decisions.

Yet the administration is forging ahead with regulations on conventional fuels that will drive up energy costs for American households and businesses. The bulk of the administration’s climate change plan is built around regulating carbon emissions from new and existing power plants that will drive out coal, which makes up 40 percent of America’s electricity generation. The Obama administration also has subsidized alternative energy sources and implemented a host of new energy efficiency standards for vehicles and appliances to reduce carbon emissions.

Koonin himself is supportive of some of these policies, including energy efficiency mandates and government spending on low-carbon energy sources. He calls them “no-regret” policies but acknowledges bigger climate strategies can carry immense costs. But even the no-regret policies have costs that make Americans worse off.

The result of these regulations, subsidies and mandates will be trillions of dollars lost in compliance costs and less economic growth.

For instance, our federal government has thrown away tens of billions of taxpayer dollars to build politically preferred energy technologies aimed to ultimately wean us off conventional fuels. A diverse, innovative energy sector does have benefits and will provide Americans with the most reliable energy at the best cost. But that should be done through free-market competition—not the government picking winners and losers.

If that weren’t enough, government bureaucrats want to play energy guardian by telling us how much energy we can use to drive our cars, wash our clothes and microwave our leftovers. The government has put in place a host of efficiency mandates, taking choices away from individuals and businesses, with the hope of reducing greenhouse gas emissions. All of these policies and regulations are predicated on the notion that we need to do something about climate change.

Cumulatively, the result of these regulations, subsidies and mandates will be trillions of dollars lost in compliance costs and less economic growth as America depends on conventional fuels for just about every aspect of economic activity. And even if the planet were headed toward dangerous levels of warming, which it is not, these policies still would be unsound as they will cost a great deal and do little to actually mitigate global temperatures. But Koonin presents evidence and uncertainties why that’s not the case when it comes to our changing climate. And he concludes his piece with an important message about politicizing the science:

Any serious discussion of the changing climate must begin by acknowledging the scientific certainties, but also the uncertainties, especially in projecting the future. Recognizing those limits, rather than ignoring them, will lead to a more sober and ultimately more productive discussion of climate change and climate policies. To do so otherwise is a great disservice to climate science itself.

And ignoring climate realities to implement economy-crushing regulations is a great disservice to both the economy and public policy.