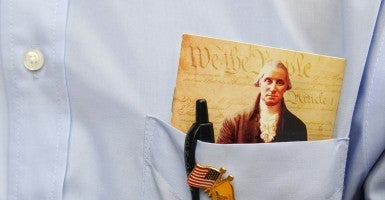 James Mazars de Mazarin is a member of the Young Leaders Program at The Heritage Foundation.

Once again, university officials have shown how progressive and tolerant they are by forcing Young Americans for Freedom at Pennsylvania State University to remove its table from a so-called “free speech zone.”

Sound familiar? It should. Last year, Robert Van Tuinen, an Army vet and student at Modesto Junior College, was shut down passing out copies of The Heritage Foundation’s “Guide to the Constitution.” He sued his college and it eventually settled the lawsuit, paying him $50,000.

This year, it was Penn State’s turn to continue the tradition of violating the Constitution on Constitution Day. But why? Lawyers for public universities should know that shutting down speech exposes them to First Amendment lawsuits. Furthermore, passing out copies of the Constitution performs a valuable educational service that many universities don’t perform on their own. If anything, Penn State should be thanking Jolie Davis and the other PSU YAF student activists.

Penn State officials offered no justifiable reason for shutting down the activists. One university administrator suggested Penn State has a neutral policy on the books, prohibiting all tables in the free speech zone. Even if this were true, it still might fall afoul of the First Amendment. But the as one student noted: “We’ve seen people’s tables out here all the time!” In other words, whatever the formal policy on the Penn State books, the university traditionally allows student organizations to have tables.

In fact, the YAF chapter at Penn State had placed a table at this exact spot before without any reported harassment from school authorities, but this time they handed out more than Constitutions – they included information about Penn State’s restrictive speech code. This is probably the real reason for the targeting. But Penn State officials might want to do some work on that speech code. They also might want to avail themselves of one of the copies of the Constitution the activists were handing out—or, better yet, the newly revamped Heritage Guide to the Constitution.

Then then need to read it and learn it and come to understand it. If they do, we won’t see them inhibiting Constitution Day events anymore.