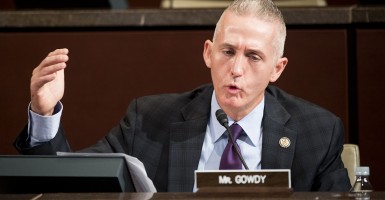 Although no fireworks erupted, the State Department’s failure to follow through on an independent group’s No. 1 security priority after the attacks proved a major highlight. Here’s a look at that issue and five others that surfaced as the House Select Committee on Benghazi began its work in public.

1. ‘Most Important’ Idea Not Adopted

The State Department rejected the suggestion that it create the new position of undersecretary for diplomatic security. Out of 40 recommendations made last year, it was one of only two that the agency didn’t accept.

Todd Keil, testifying as a member of the Independent Panel on Best Practices that made that recommendation, said the panel was “disappointed” the State Department didn’t accept this first and “most important” priority.

The independent panel was created to review the work of the Accountability Review Board that initially examined events before, during and after the attacks on the U.S. consulate and another facility in Benghazi, Libya, which left Ambassador Chris Stevens and three other Americans dead.

Greg Starr, the State Department’s assistant secretary for diplomatic security, told the Benghazi committee that the department “looked long and hard” at whether it needed the new undersecretary slot.

“If you’re not doing the No. 1 thing…what changes are you making?”–@Jim_Jordan

“We decided what was more important is if I have direct access to the secretary of state,” Starr told the lawmakers, adding:

We have modified it so I directly report to the secretary for threats to people. I am responsible [for security] no matter what it’s called.

>>> Update: Asked after the monthly Conversations With Conservatives event Thursday how the hearing went, Jordan told The Daily Signal:

I think the main takeaway is if you’re not listening to the guys on the ground and not doing the No. 1 thing they asked you to do, what changes are you really making?

2. Opening, but Just the Beginning

Rep. Trey Gowdy, R-S.C., chairman of the select committee, hinted that the investigation could run into 2016, deep into a presidential race that is likely to include Hillary Clinton, who was secretary of state when the Benghazi attacks occurred.

“This deserves an investigative process worthy of the memory of those killed.”-@TGowdySC

Gowdy sought to defend the 12-member committee against critics who say it will waste time and money investigating the Benghazi scandal again. The committee’s budget is $3.3 million but it has no deadline to complete its work.

This deserves an investigative process worthy of the memory of those killed. Some question the need for the committee. The mark of character is you do a good job with a task even if you don’t think it should be assigned in the first place. I’d rather answer questions twice than once. To those who believe it is time to move on, that there’s nothing left to discover and we learned all the lessons, well, we heard all that before and it was wrong then.

Rep. Elijah Cummings of Maryland, the top Democrat of five on the panel, said committee members should put politics aside to pursue a bigger outcome.

“This is bigger than us,” Cummings said. “The things we do today and the next few months will have lasting effects after we go to heaven.”

Starr, the assistant secretary of state for diplomatic security, said the department has implemented 22 recommendations of the Accountability Review Board, while seven others “are in progress or are nearing completion.”

Completed steps, Starr said, include starting a “counter-threat course” for foreign service employees in high-risk areas and partnering with the New York Fire Department on training to respond to fire-based attacks such as what happened in Benghazi.

“We have made what I consider to be tremendous progress,” said Starr, who assumed his position in 2013. “I have no doubt in my mind we will implement every one of these recommendations.”

Keil, representing the Independent Panel on Best Practices that was created to evaluate the review board’s efforts, said the State Department has been slow to implement change in the past.

A review board issued a report after the two U.S. embassy bombings in East Africa in 1998, Keil said, but “little has been implemented by the State Department.” Keil, who served as a diplomatic security agent for 23 years, added:

Now is time for the State Department to finally institutionalize real, meaningful and progressive change. They can’t lose this moment.

Starr said the State Department long has ranked diplomatic posts according to risk. Keil said that process hasn’t been enough to evaluate whether some missions are too dangerous to pursue.

“The first question has to be, do we need to be there?” Keil said. “Do we need to be in Benghazi? The State Department lacks risk management processes to make those decisions.”

Starr interrupted Keil to say it “should be lacked, not lack.” The diplomatic security veteran argued that the State Department has made changes to risk management processes.

“This what we focused on the most,” Starr said, adding:

It’s embracing the concept that we need to ask the question: Why are we in the most dangerous places? One of the lessons from Benghazi is that many times we don’t get specific threat information before an attack.

“We have pulled out or closed posts because of these things,” he said. “But we can’t lock people inside embassies. The whole point of diplomacy is to get out [in the field].”