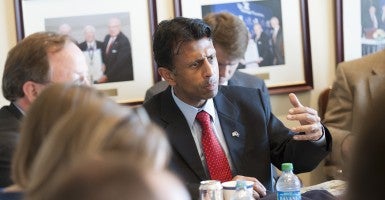 Louisiana Gov. Bobby Jindal speaking at The Heritage Foundation to a group of reporters about his new energy plan. (Photo: Steven Purcell)

“The Left, they like to tell us they are the ones [who] are following science and we’re the science deniers,” Jindal said to a small group of reporters after delivering a speech at The Heritage Foundation to debut his energy jobs plan. “But I think overall, their approach to energy is telling.”

The Republican governor said the “radical” Left wants energy to be scarce and expensive because it empowers the federal government to be more involved in Americans’ lives.

Right now, Jindal said,  America “is on the road to failure.” He said:

Jindal, elected governor of Lousiana in 2008 after two terms in Congress, has presided over a state hit by the 2010 oil spill in the Gulf of Mexico while still recovering from Hurricane Katrina.

He cited what he called the Left’s “startling” views on natural gas.

“When [natural gas] was 13 dollars, boy they loved it. As soon as it became affordable, all of the sudden they decided they didn’t like it so much,”  Jindal said.

>>>  What Contributes to Gas Prices and Solutions to Help

Nicolas Loris, a Heritage economist who specializes in energy policy, agreed that some liberals initially supported natural gas “as a bridge fuel to take us to renewables.” But because the revolution in shale gas provided an abundance of cheap natural gas, he said, “that bridge became a lot longer than they anticipated.”

“While it may be bad news for other sources of energy,” Loris added, “the low-cost energy is great news for American families and businesses.”

Jindal also cited regulations on carbon dioxide as proof of an “ideologically extreme” agenda by President Obama and other liberals. He said:

“For much of the Left, the whole debate about [carbon dioxide]  is really a Trojan horse because these are folks that never did want a free market. This was a group that was always looking for an excuse to impose more government regulation, more government oversight. … This is just their latest vehicle to do it.”

Jindal’s energy plan, co-authored by Rep. Bill Flores, R-Texas, is called “Organizing Around Abundance: Making America an Energy Superpower” and promises to usher in an “unprecedented” era of energy development and job growth.

Here are the main points:

1. Promote responsible development of domestic energy resources and construct infrastructure to transport it.

2. Encourage technological innovation of renewables and emerging energy without picking winners and losers. In other words:Stop giving taxpayer-funded handouts to politically preferred energy sources and technologies. Let the market work.

3. Unlock the economic potential of the manufacturing renaissance by putting America’s energy resources to work.

5. Bolster national security by ending policies that ban the exporting of natural resources.

6. Pursue “no regrets” policies that reduce carbon dioxide emissions without punishing the U.S. economy by putting it at a disadvantage to those of other nations.

Loris gave points to the Jindal-Flores plan for building on “what we see and know to be successful” when it comes to American energy production.

What the nation shouldn’t pursue, Loris added, is a policy of reducing carbon dioxide.

“That assumes carbon emissions are a problem,” he said.  Instead, “we can recognize that free markets that reward technological innovation can fuel the economy and reduce emissions.”

Watch this video for Jindal’s complete public remarks at The Heritage Foundation.