Obama May Be Bypassing Congress on Climate 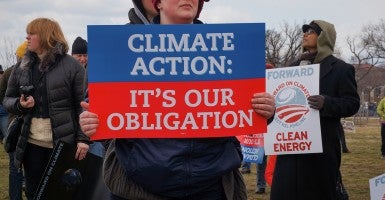 A sign of a liberal activist at the Keystone XL pipeline rally in Washington DC in 2013. (Photo: Nick Bucci/Creative Commons)

President Obama reportedly wants to go around our elected officials to implement climate change regulations that will drive up energy costs for Americans. The New York Times is reporting that the administration is looking for ways to sidestep the Constitution and the normal treaty ratification process to commit to an international agreement urging other countries to reduce carbon emissions.

The Constitution requires that any legally binding treaty must be ratified by two-thirds of Senate and signed by the president. If past experience is anything to go by, the Senate has no appetite for such a treaty. Before the American delegation headed to Kyoto, Japan, in 1997 to negotiate a global warming treaty, the Senate passed the Byrd-Hagel Resolution 95-0 expressing that any climate change treaty should not leave out developing countries or impose harm to the U.S. economy. Since then, international climate negotiations have become more meaningless by the year.

But the Times reports, “To sidestep that requirement, President Obama’s climate negotiators are devising what they call a ‘politically binding’ deal that would ’name and shame‘ countries into cutting their emissions.”

Name and shame? The administration’s plan is to call out large carbon emitters like China and India who have hundreds of millions without access to electricity and shame them for developing their economies and giving their people a better standard of living? It’s to shame them into cutting their carbon dioxide emissions when these countries are striving to gain access to breathable air and drinkable water, neither of which have anything to do with carbon reductions?  The shameful part of the administration’s plan is that it will trap developing economies in poverty and pretend that transferring wealth to them will make us all feel altruistic.

In a response to the New York Times report, a State Department official said, “It is entirely premature to say whether it will or won’t require Senate approval. “ However, if the administration does bypass Congress, it certainly won’t be the first time – it won’t even be the first time on this issue. The Times also points out that “in seeking to go around Congress to push his international climate change agenda, Mr. Obama is echoing his domestic climate strategy.”

With Congress unable to pass cap-and-trade legislation as the administration hoped, the EPA is moving forward with its own set of climate change regulations, primarily targeting new and existing power plants. Restricting carbon emissions would harm American families and businesses through higher energy costs and provide no environmental benefit. Families would pay more to use less electricity. The costs would reverberate throughout the economy as affected industries passed higher costs onto consumers. Incorporating America’s domestic climate plans into any international politically bind deal still fails the Byrd-Hagel test because these regulations will inflict serious harm to the American economy.

Furthermore, there is no need or appetite to restrict economic growth to curb greenhouse gas emissions. Americans often have a reputation for being out of step with the rest of the world, but on climate change they are in the global mainstream, according to the United Nations’ “My World” survey. As of August 27, there had been more than 3.86 million votes submitted to the survey from nearly every country and territory around the world. Individuals are presented with 16 issues and asked to select the six that “are most important for you and your family.” Dead last among the choices was “action taken on climate change.” Action taken on climate change was least important to individuals in the least developed countries. Much higher was reliable energy at home.

Americans and the rest of the world are right to be skeptical about taking action on climate change; the realities are that the planet is not headed toward catastrophic warming nor is it experiencing more frequent and violent extreme weather events.

It’s clear Obama wants his legacy to include action on climate change but in doing so he might end up bypassing democracy and the Constitution – and increase energy costs for American families.