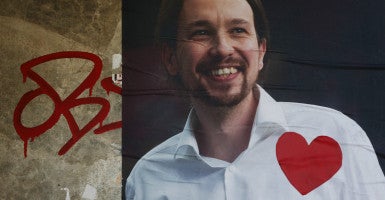 A red heart is pasted on a poster of Podemos (We Can) party leader Pablo Iglesias a day after Spain's election. (Photo: Susana Vera/Reuters/Newscom)

The political establishment collapsed in Spain in Sunday’s elections, proving once again that this is a trend affecting the entire West, not just the U.S. It did so, at least in part, for another reason that is also trending at the moment: the radical party that surprised at the polls made the case that too much national sovereignty has been ceded overseas.

In Spain’s case, that means ceded to Germany and its chancellor Angela Merkel. Her calls for “austerity” among countries that share the single currency, the euro, has made her a reviled figure for both the extreme left and right—as well as for many in the middle who believe that a country’s economic policies ought to be made in that country’s capital by that country’s legislators.

The party in Spain that took advantage of these sentiments, Podemos, adopts extreme leftist positions on the economy, social issues and international relations. Its participation in a future government would make the troubles Greece caused for global investors earlier this year seem like child’s play.

Its leader, Pablo Iglesias, is a leftist academic who wants to transform his country, rejecting much of its past, and who has risen out of nowhere to political prominence. In one difference with President Barack Obama, Iglesias wears a pony tail but never a tie.

Podemos captured 20 percent of the vote on Sunday, the first national elections it had contested. The two traditional center- right and center left parties, Prime Minister Mariano Rajoy’s Popular Party and the opposition Socialist Party, captured barely half the vote together.

Pablo Iglesias worked at one point for Venezuela’s dictator Hugo Chavez, has partnered with Iran on a television deal and praises the five-and-a-half decades long dictatorship of the Castro brothers in Cuba.

It was the first time since the introduction of democracy after the death of Francisco Franco in 1975 that the two leading parties failed to win two thirds of the vote. Podemos was actually within reach of the two; the Popular Party captured 27 percent of the vote and the Socialists 22 percent.

The results have Spaniards questioning whether the delicate constitutional balance that obtained after Franco’s 40-year authoritarian dictatorship will now crater, too, with regions like Catalonia and the Basque country seeking independence, desiring to formseparate countries on the Iberian Peninsula.

The inclusion of Podemos in a Socialist-led coalition, which could be a possibility, would raise problems. Iglesias wants to restructure Spain’s massive debt (97.7 percent of GDP) to adjust it to “social justice criteria” (translation: he wants to renege on the debt), and end the meager spending cuts implemented by Rajoy.

Overseas, he is implicated in various ways with unsavory regimes. He worked at one point for Venezuela’s dictator Hugo Chavez, has partnered with Iran on a television deal and praises the five-and-a-half decades long dictatorship of the Castro brothers in Cuba.

In other words, he would make a disastrous government leader and an even worse NATO ally.

Iglesias got one thing right after the voting was done, however: this election, as many others around the West, was about national sovereignty. “Our message to Europe is clear. Sovereignty will be our most important battle as we organize our political system, Spain will never again be the periphery of Germany. We will strive to restore the meaning of the word sovereignty to our country,” he said.

That was a message that, alas, was lost on the two traditional parties, an oversight that contributed to their historic defeats.

Rajoy’s economic policies pleased Spain’s creditors and his euro zone partners, especially the paymaster of the euro zone, Germany. Merkel never ceases to showcase Spain as the country that made the reforms she sought. But the policies were really a mixed bag.

As a result of negotiations with euro zone countries that resulted in a banking bailout in 2012, Rajoy cut Spain’s bloated government spending. He also raised both the marginal rate and the value added tax.

Rajoy also introduced much needed labor-market reforms, making it easier to create jobs without the fear that it would be impossible to fire employees afterward. That got unemployment down from a high of over 26 percent in 2013, but he couldn’t get it under 20 percent.

The pain in Spain was too much, so Spaniards punished Rajoy. While hisPopular Party’s 27 percent produced the largest number of seats in the country’s parliament, 123, it fell short of the 186 seats it had in the outgoing parliament and the 176 needed for a majority.

The Socialists’ 90 seats, along with Podemos’s 69 seats plus those of other minor leftist parties, might be able to reach a majority. They would need the support of separatist parties from regions like Catalonia and the Basque Country, which would signal trouble.

Little wonder that on Monday Spain’s IBEX 35 stock index lost 3.6 percent of its value and the yield on the key ten-year bond rose nine basis points.

Spain’s economy, the 14th largest in the world, is five times the size of Greece’s, which comes in at 43rd, just ahead of Bangladesh. If you liked the losses to your 401K earlier this year after Greece’s Syriza party, an ally of Podemos, denounced Merkel and renounced paying its debt, you might learn to love Spain.