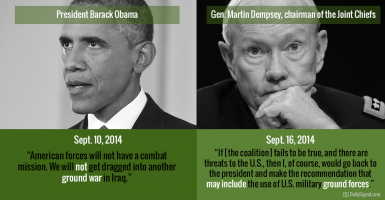 Army Gen. Martin Dempsey, chairman of the Joint Chiefs of Staff, today said he may advise President Obama to deploy U.S. ground forces should a proposed coalition of nations fail to defeat the brutal terrorist group known as ISIS.

In outlining his plan to “degrade and destroy” ISIS in an address to the nation just last week, though, Obama said he would not deploy ground troops to Iraq again. As part of a four-pronged plan to destroy ISIS, also called ISIL or the Islamic State, Obama announced he would send 475 additional troops to Iraq in a non-combat capacity only.

Testifying today before the Senate Armed Services Committee, Dempsey, a veteran of the Iraq War, recalled that the president told him to “come back” on a “case-by-case basis.”