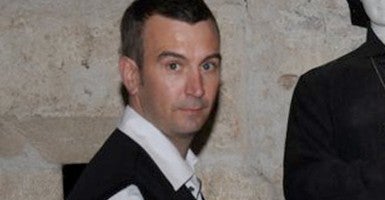 David Haines, the British aid worker ISIS claims to have beheaded, in an image that has been modified.

After a video showing the murder of  a third Westerner by the terrorist group ISIS hit the Internet last night, a top Obama administration official said this morning that America is “obviously” at war with the Islamist jihadists in Iraq and Syria.

As much as we’ve been at war with al-Qaeda since the first day we got to this office, we’re obviously in a similar fashion at war with [ISIS].  … What we’ve also said is this is not going to be like the Iraq war.

Last week, before being contradicted by White House and Pentagon spokesmen, Secretary of State John Kerry in two separate interviews declined to characterize U.S. airstrikes and other military action against ISIS as a “war.”

On CBS’s “Face the Nation” this morning, however, Kerry partially walked back his talk of  “an extended counterterrorism operation with many moving parts.”

Instead, the former U.S. senator and Democratic presidential nominee echoed McDonough by acknowledging that America is, in fact, at “war” with ISIS, also known as ISIL or the Islamic State.

In terms of al-Qaeda, which we have used the word ‘war’ with, yeah…we are at war with al-Qaeda and its affiliates. And in the same context if you want to use it, yes, we are at war with ISIL in that sense. But I think it’s a waste of time to focus on that. Frankly, let’s consider what we have to do to degrade and defeat ISIL — and that’s what I’m frankly much more focused on.

The remarks by Kerry and McDonough came hours after ISIS released a video depicting the beheading of David Haines, 44, a British humanitarian aid worker who had been captured in Syria last year. In the video, his killer mocks both Obama and British Prime Minister David Cameron.

David Haines in a family photo.

Haines, who grew up in Scotland and married twice, had two daughters — one a teen-ager, the other 4.  His family released a statement through a brother, Mike Haines, who summarized his sibling’s life’s work this way:

David was most alive and enthusiastic in his humanitarian roles. His joy and anticipation for the work he went to do in Syria is for myself and family the most important element of this whole sad affair.

“It’s not that kind of mobilization,” he said.

On “Meet the Press,” McDonough, who previously served on the National Security Council,  also addressed how the administration defines “success” in the mission against ISIS. He told host Chuck Todd:

Steven Bucci, who directs defense and foreign policy studies at The Heritage Foundation, was critical of administration attempts to downplay what is at stake.

“This is war, and it may prove to be a bitter one.”- @Heritage’s @SBucci says of ISIS.

“Even considering the subsequent reversals, Kerry’s statements are a purer indicator of the Obama team’s heart, or lack of it, for this action,” Bucci said, adding:

No one can condemn the righteousness of striking back at the evil that ISIS has shown itself to be, but the administration still insists on trying to minimize the entire enterprise. This is war, and it may prove to be a bitter one. Obama, and all of America, needs to realize and acknowledge that.

Haines’s videotaped murder by ISIS follows those of American journalists Steven Sotloff and James Foley within the past four weeks.

Cameron called the on-camera slaying of Haines “an act of pure evil,” adding in a statement that “it must strengthen our resolve” to fight the brutal terrorist network.

The murder of David Haines is an act of pure evil. My heart goes out to his family who have shown extraordinary courage and fortitude.

We will do everything in our power to hunt down these murderers and ensure they face justice, however long it takes.

President Obama referred to Haines’s murder as “barbaric” in a statement last night in which he pledged:

We will work with the United Kingdom and a broad coalition of nations from the region and around the world to bring the perpetrators of this outrageous act to justice, and to degrade and destroy this threat to the people of our countries, the region and the world.

Ultimately, McDonough said this morning, the U.S. will need the help of Congress and the nation’s “committed partners” to “defeat and ultimately destroy” ISIS.

Also appearing on “Fox News Sunday,” Sen. Lindsey Graham, R-S.C., said the administration is “delusional” if it thinks it can crush “a radical Islamic army” without a major commitment of U.S. forces.

“They’re intending to come here,” Graham said, and Obama must “rise to the occasion before we all get killed back here at home.”