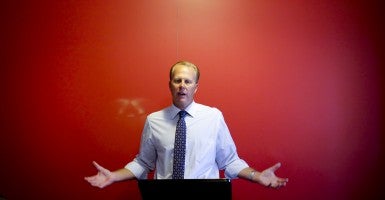 You stay green, San Diego. But it’s going to cost you.

San Diego Mayor Kevin Faulconer has introduced what would be a costly, aggressive climate plan in a state that already has some of the most egregious climate regulations on the books.

Faulconer’s plan consists largely of forcing expensive and intermittent renewable energy sources on Californians, using taxpayer dollars to promote alternative forms of energy and transportation and taking choices away from families by forcing them to reduce their energy and water consumption.

Faulconer’s climate plan aims to cut the city’s greenhouse gas emissions from 2010 (when the economy was slumping and emissions were already low) in half by 2035. Specifically, the plan would set a 100 percent renewable power generation goal and ambitious targets to increase the amount of people that walk, bike or use mass transit to commute. Also included in Faulconer’s plan are aggressive energy efficiency targets to reduce “electricity consumption in apartments and condominiums by 50 percent, by 53 percent in commercial properties and by 40 percent in city buildings” as well as cutting water use down by 9 gallons per capita per day.

To give you an understanding of the line of thinking here, one of the earlier versions of the plan even included a mandate that required property owners to make energy efficiency improvements on their homes before they could sell it. And the plan broadly would “give the city a backbone of sorts when future development controversies arise. In the past, the city has quickly caved to neighborhood concerns over new housing or transit projects – if the plan becomes law, the city could argue it’s legally required to support environmentally friendly urban growth principles.”

Now maybe that doesn’t sound that bad. Walking’s good for you, reducing energy and water could save you some bucks and increased renewable energy generation sounds okay. And in a free market where individuals made those choices about commuting habits and energy consumption and producers invested in renewable energy because they saw an opportunity, those decisions are fine.

There is nothing wrong with more renewable energy or alternative fuels replacing conventional resources of energy, but if that shift occurs, it should be driven by market forces, not dictated through government policy.

But Faulconer’s climate plan is a bureaucratic, centrally-planned re-engineering of San Diego’s energy economy that’s going to force pricier electricity on ratepayers and force residents into consuming the amount of energy their government wants them to consume. Billed as an environmental jobs plan, Faulconer’s climate agenda is neither.

Sure, the government can spend money on politically preferable sources of energy generation and “create” jobs in those sectors. But government expenditures are not free. Instead, they merely shift resources from one sector to another and they use labor and capital much less efficiently than the private sector To make matters worse, the increases in energy prices would disproportionately eat into the income of the poorest American families.

The climate benefits of the plan should be called into question as well. Even if the United States as a whole reduced its greenhouse gas emissions 83 percent below 2005 levels by 2050, it would only reduce global temperatures by two-tenths of a degree Celsius by the end of the century because of the contributions of warming from developing countries. And that’s assuming the climate models accurately project carbon dioxides contribution to warming, which has proven not to be the case. One city’s costly climate plan would avert even less warming.

Much like the administration’s climate action plan, Faulconer’s proposal is all economic pain for no climate benefit.