A Primer for Obama’s ISIS Speech: No Easy Answers for a Long Fight 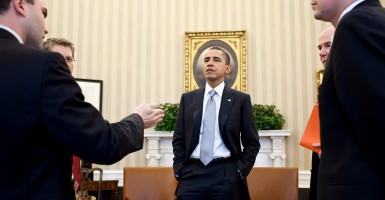 In a prime-time address tonight, President Obama hoped to explain to Americans his strategy for defeating the Islamic State, the terrorist group whose rush of mass killings, rapes, videotaped beheadings and ethnic cleansing has outraged the world.

The president was expected to announce an escalated military campaign against the brutal Islamist jihadists also known as ISIS or ISIL — including airstrikes in Syria, where the Islamic State has its base and civil war has raged for over three years.

>>> Commentary: What Obama Got Right — and Wrong — in His ISIS Speech

“Our objective is clear: We will degrade and ultimately destroy ISIL through a comprehensive and sustained counterterrorism strategy,” Obama will say, according to excerpts released by the White House this evening. He will add:

It will not involve American combat troops fighting on foreign soil. … This counterterrorism campaign will be waged through a steady, relentless effort to take out ISIL wherever they exist using our air power and our support for partner forces on the ground. President Obama works on a speech in the Oval Office. (Photo: Aude Guerrucci/Newscom)

Obama also wants Congress to support a move to arm and train Syrian rebels as part of the administration’s plan to confront the Islamic State.

Members are finally getting briefed on the range of options the president is contemplating, and the White House has made a request to add a limited authorization to the continuing resolution (CR) as part of its plan to take on ISIL [the Islamic State, or ISIS].  We’re doing our due diligence and discussing it with our members.

The Islamic State controls wide swaths of territory in both Iraq and Syria, but the United States has so far limited its military engagement to Iraq.

A pivot into Syria would represent uncertain territory for an administration that has been reluctant to create a spillover effect in a volatile region where various armed groups compete.

>>> Transcript of President’s Speech on ISIS

Today, the Pentagon said it has launched 154 airstrikes on the Islamic State so far and has a total of 1,043 U.S. military personnel in Iraq.

The Pentagon says it has launched 154 airstrikes on the Islamic State so far.

In a speech at the Brookings Institute last week, Matthew Olsen, director of the National Counterterrorism Center, provided a window into the Obama administration’s thinking.

“We are implementing a comprehensive strategy that calls for a global coalition using all tools — diplomatic, military, intelligence and law enforcement — to defeat the group,” Olsen said of the Islamic State in the speech.

At the same time, in the aftermath of the Islamic State’s video-recorded beheading of two American journalists, Olsen hinted at additional military action.

“The U.S. will continue to do whatever is necessary to protect Americans at home and abroad,” Olsen said. “We will continue to take direct action and we are continuing our support for Iraqi and Kurdish security forces and for the moderate Syrian opposition.”

President Obama in the White House briefing room Aug. 28: ‘We don’t have a strategy yet.’ (Photo: Polaris/Newscom)

Some military and Middle East experts are ready to embrace an expanded, long-term military strategy if Obama proposes one.

But as Obama explains his strategy for “degrading and ultimately destroying the terrorist group,” as the White House says he will do, experts caution Americans from worrying that ISIS terrorists have the capability of striking the U.S. homeland to mark the 13th anniversary of the September 11 attacks.

The president has no easy answers, and he’s had no easy answers since the Syrian civil war began. These are honest to goodness, really horrible bad guys and they have been really clear that they want the whole world. But they are not the next Napoleon. They are big and dangerous but not Supermen.

‘This Kind of Fight Doesn’t End’

Speaking at The Heritage Foundation today, Bucci and James Phillips, an expert in Middle Eastern affairs at the think tank,  assessed the Islamic State and how Obama should approach his speech — and strategy.

“The president needs to explain what this threat is and why it’s a national interest,” Phillips said, adding:

“It’s not a so-called JV team, but an alpha team within the Middle East that if allowed to grow could eclipse al-Qaeda’s core group. He needs to say what he is going to do [to stop it].

Bucci and Phillips said engaging the terrorists will be a long-term proposition, a necessity that Obama appears to have acknowledged.

“I don’t want to see some three-year deadline appear in this speech,” Phillips said. “It is a long, ideological war that will go on for decades, if not centuries.”

Bucci said beating the Islamic State won’t be as simple as killing its leader, Abu Bakr al-Baghdadi, as the U.S. did with Osama bin Laden and al-Qaeda:

I don’t think one great action will solve the problem. Americans love that: The big kill. [But] this kind of fight doesn’t end. It just continues.

Bucci, a top Pentagon official during the administration of President George W. Bush,  said he supports the current military action in Iraq — airstrikes, advisers and intelligence to help Kurdish Peshmerga fighters and the Iraqi military.

The aftermath of a shelling with an explosive barrel that killed and wounded civilians in Syria. (Photo: Karam Almasri/Newscom)

But the former Army Special Forces officer recommends more engagement, similar to the early U.S. strategy in Afghanistan, where it embedded special operations forces with the Afghan Northern Alliance to provide advice, training and close air support against the Taliban.

“I spent time in Iraq,” Bucci said.  “My son did too. I don’t relish special operations going in. But they are pros and they’re ready to go. ”

I hope this will be a broader strategy to include allies such as special operations forces from Britain and other NATO allies like Jordan, Turkey, Saudi Arabia and Qatar. Together, that can drive ISIS out of Iraq.

These forces would not operate as combat troops fighting on the ground.

Bucci says a complete re-invasion of Iraq isn’t “marketable or necessary” because the Islamic State is a “regional problem, not just an American problem.”

Obama’s strategy will be complicated because ISIS’ many enemies also fight one another.

The complex landscape of shifting alliances is particularly evident in Syria, where ISIS began before sweeping into Iraq.

>>> Obama: ‘This Is Not the Equivalent of the Iraq War’

The U.S. supports the ouster of Syrian President Bashar al-Assad, while Iran has supported him. Russia is also an Assad ally.

Iran and Russia are allies of the Syrian regime.

“The U.S. should pursue and hit targets in Syria, but don’t do too much to help Assad,” Bucci said. “It should help more moderate elements of the opposition. But that’s hard to do. We’re not good at finding who the good guys and bad guys are.”

In addition, NATO allies Qatar and Saudi Arabia have supported radical Sunni Muslim elements of the resistance against Assad.

>>> Video: Bucci, Gardiner on What Obama Should Say Tonight

“They saw ISIS as the lesser of two evils,” Bucci said. “I hope they get their heads right and realize ISIS is going after them too.”

In Iraq, Shiite Muslim militias backed by Iran — formerly U.S. enemies — are now taking up arms against the Sunni-dominated ISIS.

“That’s why it’s important to keep Iran out,” Phillips said. “They are pulling extreme Shia militias into this. That can be a recipe for endless civil war.”

Disenchanted Sunnis not aligned with the Islamic State also are fighting the Iraqi government. Phillips said:

“Most who are fighting the Iraqi government are not ISIS. Bin laden said that people follow the strongest horse and he’s right. In the Middle East, Islamic groups are like a zen diagram where one person belongs to one, two or three different groups.” To encourage Sunnis to turn their weapons against the Islamic State, he said, the new Iraqi leadership must include them in the government.

“The big question is what comes after the day after,” Phillips said.

Added Bucci: “Countries follow their own national interests, not America’s. That is why America has to lead.”

The Threat at Home

Olsen, the nation’s counterterrorism chief,  acknowledged in his speech that the Islamic State has the capacity to carry out “small-scale” attacks against American allies such as Lebanon, Jordan and Turkey. However, he said the U.S. has no credible information that the terrorists plan to attack the American homeland.

Bucci agreed with that assessment, but said the U.S. must be diligent:

ISIS does not have the capacity today to invade America, It’s not like there are squads of ISIS fighters planted at the border ready to take down targets. 9/11 took planning, synchronization and investment. We have not seen ISIS do that on an International scale. But it doesn’t take a strike like 9/11 to make an impact. I hope we take ISIS at their word that they are at war with us.