The U.N. Is Releasing Scary Videos of Climate Change’s Effect in 2050. Why You Should Be Skeptical. 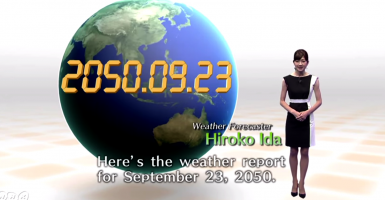 A screen capture from one of the UN’s catastrophic 2050 weather reports being released for this month's Climate Summit. (Photo: WMO Video Master/YouTube)

We’re not all that surprised when weather predictions for next week—or even tomorrow—don’t pan out.

So when the United Nations seeks to drum up support for this month’s Climate Summit by posting videos of “weather reports from the future” to show us what weather will look like in 2050 if we don’t change our carbon-emitting ways, we have a right to a little skepticism.

The press release signifying the publication of the videos is pretty scary:

Mega-droughts and deadly heatwaves. A year’s rainfall in a month. Coastal cities under water. Destruction of ocean life. Invasive pests. Arctic cruises. These are some of the scenarios for 2050 from a series of imaginary but realistic reports which give a foretaste of warmer, wetter and wilder weather in the future.

The teaser video shows clips of popular news people around the world reporting on extreme weather in the future and implying climate change affects us already and will only worsen as time goes on. But not even the data and the UN’s own Intergovernmental Panel on Climate Change’s reports lead to such conclusions.

Global temperatures have not been cooperating with multiple climate models that predicted a drastic rise in global temperature. As Heritage’s David Kreutzer points out, “Far from increasing at an accelerating rate, the best measures of world average temperatures indicate there has been no significant warming for the past 15 years—something that the IPCC’s climate models are unable to explain.” So, to claim drastic warming is a bit far-fetched.

According to the IPCC, “There continues to be a lack of evidence and thus low confidence regarding [trends] in the magnitude and/or frequency of floods on a global scale.” Kreutzer says it’s the same for the United States. “Some places will always be drier and some wetter in comparison to an earlier period. However, for the U.S. overall, there has been no trend.” This claim doesn’t appear to be factual either. Here’s more from Kreutzer:

“The latest report on the science from The Intergovernmental Panel on Climate Change and analysis provided by the [Obama] administration’s own National Climatic Data Center conclude that there isn’t a case for extreme weather increases – no significant trends for floods, droughts hurricanes or tornadoes.”

There’s still more than 35 years until 2050 comes around, but the data available today doesn’t lead one to the conclusions of the UN’s catastrophic weather report.

Perhaps a video should be made of what 2050 will look like if the left’s environmental and climate change agenda proceeds unchecked. So far, it seems the drastic regulatory schemes implemented to fight climate change would hardly affect the climate, but the economic ramifications would be dire and extremely costly in jobs, economic activity, the standard of living and human flourishing overall. Sadly, the UN’s video seems to miss that important point.