Does Obama Have to Notify Congress Before Taking Military Action Against ISIS? 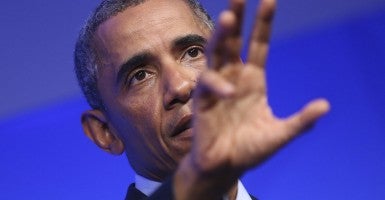 The beheading of another American journalist this week sparked many members of Congress to urge President Obama to amp up U.S. military action against the Islamic State, otherwise known as ISIS.

But before he does so, many of those same lawmakers are demanding that the president first seek congressional authorization, pursuant to the War Powers Resolution, to continue the use of military force in Iraq and perhaps launch military action in Syria.

Unhappy with the conduct of the Vietnam War, Congress passed the War Powers Resolution—over Richard Nixon’s veto—in 1973. The intent was to give lawmakers more oversight over the administration of war. The resolution requires the president to notify Congress whenever U.S. armed forces are deployed into hostilities or impending hostilities, and to terminate use of force within 60 days, unless Congress declares war or authorizes use of force.

It also mandates that the president report to Congress at least every six months as long as U.S. forces are deployed.

Presidents since Nixon have maintained that the War Powers Resolution unconstitutionally impinges on their authority under Article 2, Section 1 of the Constitution to act as commander-in-chief. But since Article I, Section 8 grants Congress the power “to declare war,” Congress claims that the president’s power to act as commander-in-chief is limited to times when Congress has declared war or otherwise authorized the use of force; or in case of an national emergency due to an attack on the United States.

Despite this constitutional conflict, many presidents have complied with parts of the War Powers Resolution.

For example, George H.W. Bush reported to Congress on the use of U.S. forces in Operation Desert Shield in 1990 and later sought support (but not permission) from Congress to use force against Iraq in Operation Desert Storm. Bill Clinton reported to Congress on U.S. military involvement in Bosnia and Kosovo, and George W. Bush sought and received authorization from Congress for the use of military force against those responsible for the attacks on Sept. 11, 2001.

But in some instances, presidents have chosen not to comply with the resolution’s requirements. In 1981, Ronald Reagan sent military advisers to assist the El Salvadoran government against insurgents without reporting to Congress or seeking authorization.

Following both instances, members of Congress filed lawsuits challenging Reagan’s and Obama’s purported violations of the War Powers Resolution, but these suits were dismissed for lack of standing. Courts are not interested in playing referee in disputes between the political branches, particularly when it involves matters of foreign policy.

One of the benefits of having a sole commander-in-chief (rather than 535) is that it allows for swift and decisive action, particularly when it comes to deploying troops overseas to respond to rapidly-evolving threats to our national security.

Presidents have done this dozens of times throughout our nation’s history without a formal declaration of war or statutory authorization. But with Obama’s admission last week that he did not yet have a strategy for dealing with the Islamic State, some in Congress are arguing for congressional involvement and oversight.

Rep. Ed Royce, R-Calif., chairman of the House Foreign Affairs Committee, announced on Tuesday that it is “requesting the secretary of state to present a plan, a strategy focused on rolling back ISIS, defeating ISIS through the use of airstrikes and the support of those with common interests.” Chairman Royce expects the House will vote on authorization of the use of force in the coming weeks.

Obama first ordered airstrikes against ISIS in northern Iraq in early August and notified Congress, so some argue that he must get authorization from Congress to continue or terminate the use of force by early October.

In a 2007 interview with the Boston Globe, then-Sen. Obama said, “History has shown us time and again … that military action is most successful when it is authorized and supported by the legislature branch. It is always preferable to have the informed consent of Congress prior to any military action.”

Now is not the time for Congress and the president to engage in a turf war over who is in charge when it comes to dealing with the threats posed by ISIS. The administration must develop a comprehensive strategy to defeat ISIS, communicate that strategy to the American people and Congress, and then work with Congress to accomplish that task.