Obama Should Talk About ISIS the Way David Cameron Does 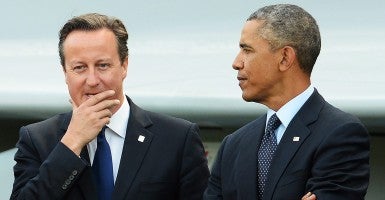 The contrast between last week’s press conference in London by British Prime Minister David Cameron and the White House remarks by President Obama could not have been starker.

Cameron delivered a robust assessment of the scale of the Islamist threat to Great Britain and to the free world.

He told journalists assembled at Downing Street that “what we are facing in Iraq now with [the Islamic State] is a greater threat to our security than we have seen before.”

He made it clear that ISIS, also known as the Islamic State, must not be allowed to establish an Islamist caliphate in Iraq. If they succeeded, “we would be facing a terrorist state on the shores of the Mediterranean and bordering a NATO member.”

In announcing his government’s decision to raise the United Kingdom’s terrorism threat level to “severe,” Cameron announced a series of measures to combat the Islamist threat within Britain itself, including tough new measures against British-born, self-styled “jihadists,” hundreds of whom have traveled to Iraq and Syria in recent months to fight with the Islamic State.

Cameron addressed the Islamist menace head on, declaring that “the root cause of this threat to our security is clear: it is a poisonous ideology of Islamic extremism that is condemned by all states.”

In contrast, Obama’s remarks to the White House press corps were weak-kneed, meandering and confused, sending mixed messages both to America’s enemies and the American people.

Obama revealed that his administration currently has “no strategy” for dealing with the Islamic State threat, words that no doubt reassured the group’s murderous leadership, currently waging a campaign of terror across vast swathes of Iraq and Syria.

While Cameron appeared self-assured and determined in his approach, Obama came across as a deer in the headlights, unable to outline a coherent U.S. response to a rapidly growing crisis in the Middle East.

As the British prime minister pointed out, the Islamic State, al-Qaeda, and Islamist militants across the world pose a grave threat to our security and interests. They must be combated at home and abroad. Both the United States and Great Britain must be prepared to lead the free world in the defeat of the Islamic State and its cohorts. The alternative to bold U.S. and British leadership is an Iraq that descends into medieval-style barbarism, dominated by brutal terrorists, whose very goal is the destruction of the West.

Cameron issued an important warning to the world, one that should be heeded by a White House that badly needs a clear sense of direction and a real strategy for winning the global war against the Islamists.