She Announced Her Pregnancy Way Before 12 Weeks. Why More Women Should Consider Doing the Same. 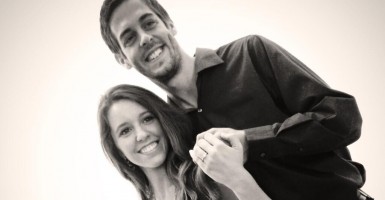 Fans of the hit TLC show “19 Kids and Counting” were excited to watch daughter Jill Duggar get married in June–but they weren’t expecting to hear she was pregnant just two months later.

Duggar and her husband had pledged to remain sexually abstinent until marriage. So, had they violated the pledge? Or was she just sharing the news before the customary 12 weeks most women wait to make sure the baby survives the first trimester, when miscarriages are most likely?

Duggar announced a March due date, which means she was married when she became pregnant. She simply was ready to let the world know, telling Page Six:

“Understanding that the majority of miscarriages happen within the first trimester, and believing that every life is precious no matter how young, we decided to share our joyful news as soon as we could.”

As Bethany Mandel pointed out in The Federalist, it was brave of Duggar to tell the world of her pregnancy so early.

But Duggar’s statement yesterday is much more than brave. It demonstrates a genuine respect and acknowledgment of life that those who consider themselves pro-life might want to consider.

By validating the humanity of the rapidly growing child in her womb, the outside world was reminded that a distinct human being came into existence at the moment of fertilization, complete with a unique genetic code, fingerprints and personality that never again would exist were this life to end before birth.

As the Heritage Foundation’s Sarah Torre wrote, this tiniest of humans is “someone who has inherent value and possesses a right to life”–just like you and I.

A friend who recently miscarried twins told me  she wished she had opened up about her miscarriage to people instead of bottling it up inside.

“I felt their spirits inside me,” she said.

It wasn’t just losing the hope of motherhood (it was her first pregnancy), it was the devastating loss of her children, whose souls she felt, whose bodies she nourished, whose heartbeats vibrated within her.

More than simply the knowledge of a growing baby, the physical evidence is indisputable. As Mandel wrote:

“We have been made to believe that a ‘fetus’ is a ball of cells well beyond when it actually is (it resembles a human, with a heartbeat, just two weeks after a missed period). Arms, legs, and a head are clearly visible on an ultrasound, waving around, just one month in.”

Not everyone will be as comfortable as Duggar about sharing pregnancy news so early, but there’s absolutely no reason it should be taboo to do so. In fact, it may help some recognize the truly scientific humanness of unborn babies at every stage of life.

And that is a beautiful thing.