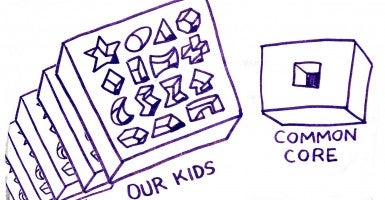 “The federal government has hijacked and destroyed the Common Core initiative,” Jindal said in a prepared statement.

The lawsuit, filed this morning by the Republican governor in federal court in Baton Rouge, La., alleges that the U.S. Department of Education under President Obama used a $4.3 billion grant program and waiver policy to trap states in a federal “scheme” to nationalize school curriculum.

Common Core is the latest effort by big government disciples to strip away state rights and put Washington, D.C., in control of everything. What started out as an innovative idea to create a set of base-line standards that could be ‘voluntarily’ used by the states has turned into a scheme by the federal government to nationalize curriculum.

Lindsey M. Burke, the Will Skillman fellow in education policy at The Heritage Foundation, said Jindal’s suit highlights the “sheer number of federal fingerprints on the Common Core push.”

Critics of Common Core have long noted that the effort, at the very least, runs counter to the spirit of the three federal laws explicitly prohibiting federal direction of curriculum: the General Education Provisions Act, the Department of Education Organization Act, and the Elementary and Secondary Education Act.

They’re also more likely to result in the standardization of mediocrity rather than establishing standards of excellence – something that has become even more evident as states compare Common Core to the previously excellent standards in place in states such as Massachusetts and Indiana.

In June, Jindal acted to make the Bayou State the fourth state to exit Common Core. Bypassing the legislature and issuing a series of executive orders, the Republican governor pulled Louisiana from the standards and assessments program and from all federally subsidized standardized tests.

>>> ‘We Want Out’: Bobby Jindal Pulls Louisiana From Common Core

Some educators, however, challenged the legal groundwork for the governor’s decision. John White, state superintendent of schools, argued that Jindal cannot unilaterally withdraw Louisiana from Common Core. He insisted the state will “continue to implement” the national standards.

Andrew Kloster, a legal fellow at The Heritage Foundation, said the two lawsuits are distinct. Kloster told The Daily Signal: