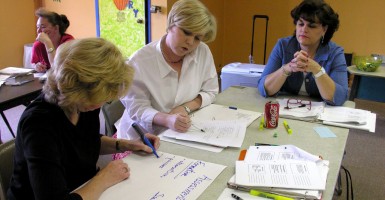 The annual PDK/Gallup poll, released on Wednesday, found that 60 percent of Americans oppose Common Core because they fear the national standards will limit teachers’ flexibility to teach effectively.

EducationNext’s 2014 opinion poll, which was released earlier this week, found teacher opposition to Common Core more than tripled—from 12 percent in 2013 to 40 percent in 2014:

In 2009, the Obama administration announced it would use $4.35 billion of competitive Race to the Top grants and No Child Left Behind waivers as incentives for states to adopt “standards common to a significant number of states.” Since then, 46 states signed on to Common Core and agreed to implement the standards by this fall.

Over the last year, as the deadline neared, some of those states have begun to reconsider the costs of their commitment—both financially and in terms of autonomy. As opposition grew states either withdrew from the two federally financed testing consortia or halted implementation. In March, Indiana became the first state to exit Common Core.

Since March, three additional states have exited Common Core—Oklahoma, South Carolina and Louisiana—and 14 others have pushed back against the standards in significant ways.

Meanwhile, support among teachers has plummeted and support among parents has declined. According to the Friedman Foundation for Educational Choice’s recent 2014 Schooling in America Survey, “intensity against Common Core is strongest among school parents.”

But opposition has taken many forms.

May of last year, the American Federation for Teachers’ Randi Weingarten called for a moratorium on the high-stakes tests associated with Common Core. “You think the Obamacare implementation is bad. The implementation of the Common Core is far worse,” she said.

New York’s test results from last school year also suggest Common Core implementation is not going as planned. New York was one of the first states to implement Common Core and began testing during the 2012-13 school year.

The Empire State’s test scores plummeted in 2013 but increased this year. But as the New York Post reported, the state also “dropped the number of raw points needed to hit proficiency levels in six of the 12 English and math exams given to students in grades 3 to 8, officials acknowledged.”

Before even the first round of testing, 49 principals in New York expressed their concerns in a letter to education commissioner John King. Now even the Gates Foundation—the second-largest financial backer of Common Core after the federal government—has called for a two-year delay of the consequences associated with Common Core testing.

The breadth of opposition against Common Core, particularly from teachers, suggests those closest to the standards and tests don’t like how implementation is playing out.

As The Heartland Institute’s Joy Pullmann writes in The Federalist, teachers are entering this next school year with both optimism and worry. Although some teachers are “enthusiastic” about Common Core, most will have to rethink their classrooms and teaching style to conform to a set of expensive standards that are untested and not benchmarked.

The deadline to implement Common Core has been reached in many states across America, but this latest push to centralize education is turning out as many have argued it would—it is further distancing educational decision-making authority from those closest to the students. Empowering teachers means listening to their concerns—especially when it comes to what is taught in their classrooms.