No Joke: Florida City Makes It Illegal to Wear Your Pants Too Low 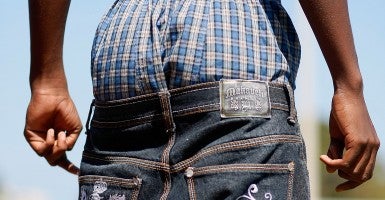 Do we really need to make this illegal?

A city in Florida passed an ordinance “prohibiting pants more than two inches below the waistline,” according to Fox News’ Orlando affiliate. Those who keep their pants slung a little too low face a “penalty of up to a $500 fine or up to 60 days in jail.”

“We are tired of seeing young men of all descriptions, white, blue, green, black and orange walking around with their pants down and their underwear showing,” said Ocala, Fla., City Council member Mary Rich.

Sure, I’d be fine with never seeing drearily patterned boxers in public again—as I suspect many Americans would be.

But I’d also be fine with, say, “Transformers” director Michael Bay never making a movie again. That doesn’t mean it’s appropriate for me to campaign for a law to ban Bay from filmmaking.

“The police should be fighting real crime, not wasting the court’s time with trivial matters,” says Jordan Richardson, a visiting legal fellow in the Meese Center at The Heritage Foundation. “A belt is needed, not another law.”

The NAACP is protesting the law. “We are not here to say that we are in favor of our young men wearing their pants like this,” said NAACP’s Loretta Pompey Jenkins, “but we are in opposition to our city government taking the position of dictating dress codes.”

Jenkins is right: It’s not for the law to decide what’s appropriate to wear and what’s not.

This is a case for the fashion police, not the actual police.