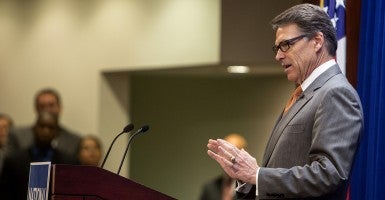 In a speech in Washington expected to focus on immigration reform and border security, Texas Gov. Rick Perry instead zeroed in on a crisis happening far away — but with far-reaching impact on Americans.

Perry, alternately rocking his fists and bringing his palms together as if to pray, called for intensified U.S. military action against Islamist terrorists in Iraq during a well-received address today at The Heritage Foundation. The alternative, he suggested, is unthinkable.

“The ISIS version of mission creep is to follow through on their threats by sending recruits to this country,” Perry said,  referring to the brutal Sunni jihadists also known as the Islamic State. “What rational observer thinks such an attack is not part of their plan?”

“I think all of your options have to be open,” Perry said later, answering a question about whether the Obama administration should deploy troops to combat the Islamic State:

Perry, making his first public appearance in Washington since his indictment Aug. 15 on two felony counts of abuse of power, criticized President Obama and his national security team for too carefully labeling U.S. airstrikes against the Islamist forces as “limited.”

“More airstrikes are necessary,” the Republican governor said, saying of the Islamist jihadists:  “we have every reason to take these individuals at their word” that they are out to attack America.

“We’re talking about a movement that is now bigger and better financed than al-Qaeda ever was,” he said.

This week, the Islamic State posted a video of their brutal execution — by beheading — of kidnapped American photojournalist James Foley.

Putting that video and other such images online is meant as “a preview of what we can expect in America,” Perry said.

He expressed concern that Foley’s killer, who spoke in the video in what sounds like a British accent, has Western roots. “How many other jihadists out there are carrying Western passports?” the governor asked.

Perry, who is testing another run for the Republican presidential nomination, was indicted by a grand jury in liberal Travis County on charges that he abused his office and tried to coerce a Democratic district attorney to resign after she was convicted of drunk driving.

He briefly addressed those charges as politically motivated.

“I am very confident in my case,” Perry said. “[The allegations] are an attack on our system of governance. I assure you… I will defend the constitution and stand up for the rule of law in Texas.”

>>> Daily Signal Interview With Perry: ‘We’ve Been Retreating From the World Stage’

Perry also took jabs at Obama, who he said chose not to “chopper down” to the border while visiting  the governor’s state for Democratic fundraisers at the height of the crisis that saw thousands of unaccompanied minors from Central America surging into Texas from Mexico.

Perry said he disapproves of the president’s use of executive power:

We’ve got 29 months left in the presidency of Barack Obama. That’s the bad news. The good news is he’s got 136 days left until the next Congress convenes [after mid-term elections] with a Republican House and Senate. He is going to get a little taste of checks and balances.”

Alternately, Perry said, Obama does have it “within his power to deal with [the border crisis] under current law.

Perry’s remarks, in a keynote address for a Heritage event co-sponsored with National Review called “The Border Crisis and the New Politics of Immigration,” come as Obama is weighing new executive actions to allow millions of illegal immigrants to remain in the United States.

>>> Heritage Event: Americans Have a Growing Problem With Illegal Immigration

After calling for stronger federal enforcement action, Perry decided to deploy up to 1,000 National Guard troops to the border with Mexico and to launch Operation Strong Safety, which sent in state troopers to assist local law enforcement.

“The crisis is a direct consequence of his own policies,” Perry said of Obama. “The National Guard is doing all they can, and the entire nation is benefiting from that.”

The governor insisted that any immigration reforms, which Obama has warned he will make in the absence of congressional action to change U.S. law,  must come only after the border is secure:

To those who wait on comprehensive reform, let’s start with comprehensive border enforcement. All talk of immigration reform is pointless because Washington has no credibility.

But Perry, on his way to New Hampshire to address conservative activists Friday and Saturday, appeared to put his attention squarely on a problem with potentially broader and more serious consequences.

Addressing whether the Islamic State, the terrorist force formerly known as ISIS,  could attack the American homeland, he said:

If their astonishing seizure of territory [in Syria and Iraq] is any indication, we have every reason to take these individuals at their word.

He urged that the Obama administration and U.S. allies air-lift arms to Peshmerga fighters in the Kurdistan region, calling them “one very potent force for the good in Iraq” and adding:

They’re a well trained, disciplined militia. By every account, they have the will and the ability to fight back against the terrorists. What’s missing are the heavy weapons they need to stop the advance of ISIS, counter its maneuverability and put it on the defensive.

“Nothing less than a sustained air campaign to degrade and destroy ISIS forces. And even though these killers have seen glimpses of our superior power and technology, they need to see a lot more of it.  … Air power is a major part of it. But it’s also going to take more special operations, intelligence, and advisory support than we’ve offered so far.