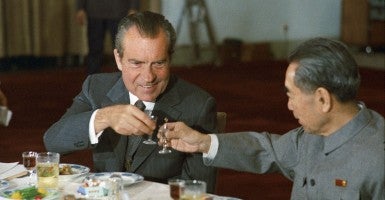 Presidents in recent decades carefully tried not to overstep their executive authority in domestic policy. They may have pushed the envelope on national security and war-making powers, but they were reluctant to take any executive action perceived to be a blatant rewriting of a law or a unilateral political move.

Part of the reason is Watergate. The abuse of executive power by President Nixon put a taboo on his successors throwing their weight around for political gain. Republicans and Democrats realized they shared an interest in fair practices and the rule of law. Power in office was changing hands so often in those years that both sides more or less respected the constitutional balance of power between Congress and the executive.

This taboo quite consciously broke with the past — the new consensus to work within certain rules had not always been the case in American history. Progressives like Teddy Roosevelt and Franklin D. Roosevelt, for example, had been serial violators of the Constitution. The former saw himself as a one-man government with little use for Congress or the Supreme Court. FDR treated constitutional restraints on his office as mere challenges to overcome. He not only tried to pack the court but, as the Cato Institute’s Jim Powell recently noted, he used executive authority to regulate wages, create federal agencies, criminalize the possession of gold and, most controversial of all, detain Japanese-Americans in “relocation camps” (Executive Order 9066). Nixon continued this assertion of domestic authority by instituting wage and price controls through executive order.

By the time of the presidencies of Ronald Reagan and George H.W. Bush, a backlash against executive abuse for domestic political purposes had already set in. The extensive use of executive authority for war-making and national security purposes continued, but there was a definite sense that presidents like FDR went too far in abusing their authority on domestic policy. President Clinton may have continued the practice of waging war with executive authority in Bosnia and arguably sped up the immigration process in 1996 for political purposes, but his domestic policy executive actions were not nearly as transgressive as FDR’s. The executive actions taken by Presidents Reagan and Bush were very different from what President Obama is doing, despite this White House’s claims; they also were well within the rules established by the post-Watergate consensus. Reagan and Bush were not trying to rewrite a law that had failed to pass in Congress. They were merely deferring deportations of children and spouses of illegal immigrants who were eligible for amnesty under a 1986 law Congress had passed while their cases were being processed by the immigration officials. There was no hint that either president went ahead because “Congress had failed to act.”

The comparisons are indeed spurious. But the attempt to make them is revealing. By saying he’s acting no differently than Reagan and Bush 41, Obama is clearly trying to shift the narrative. He’s pretending that what he’s doing is nothing new, even though only a few years ago he was insisting he lacked the very authority he’s now claiming.

He was either wrong then or wrong now. The Constitution — not to mention the consensus practice of the past 40 years — says he’s wrong now. It seems Obama was merely biding his time. He apparently never believed what he had said before. In his mind, the old taboo on executive overreach was never a constitutional peace pact between the parties, but a temporary truce to be broken at the most politically opportune time.

The danger for Democrats is that a future Republican president may return the favor. The bigger danger for America is that future Democrats will go even further, overstepping constitutional boundaries not just for the executive branch but for the courts and even Congress. Such actions would be a recipe for ongoing constitutional crises and an erosion of the rule of law and democracy.

What a pity. So much progress had been made since FDR and Nixon. Obama is throwing it all away.

Originally published in the Washington Times.