The Way Forward in Iraq 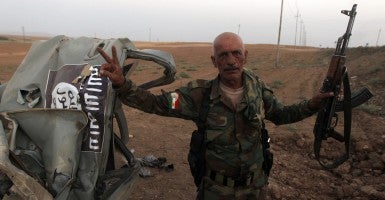 A Peshmerga fighter flashes the sign for victory next to the remains of a car, bearing an image of the trademark jihadist flag, which reportedly belonged to Islamic State (IS) militants after it was targeted by an American air strike in the village of Baqufa, north of Mosul, on August 18, 2014. Kurdish peshmerga fighters backed by federal forces and US warplanes pressed a counter-offensive Monday against jihadists after retaking Iraq's largest dam, as the United States and Britain stepped up their military involvement. (Photo: Newscom)

In the last few days, the administration has made tentative steps to address the crisis in Iraq.  After threatening not to release his hold on the office of Iraqi prime minister last week. Nouri al-Maliki avoided a major political crisis by relinquishing power. Further, with U.S. air support, Iraqi officials report “Kurdish and Iraqi forces were on the verge of reclaiming control of the strategic Mosul Dam from the Sunni militants who seized it two weeks ago.” In addition, the threat against Yazidis trapped on Iraq’s Mount Sinjar appears to have abated. There is, however, far more to be done before declaring that a disaster in Iraq has been averted.

The situation in Iraq remains grave. Spiraling violence, political instability, and a humanitarian crisis caused by the Islamic State of Iraq and Syria (ISIS) could impact U.S. vital interests. The Obama administration has an obligation to take responsible action. Congress should insist the president take immediate, suitable, and appropriate measures to safeguard American interests.

Further, President Obama was right when he said, “I don’t think we’re going to solve this problem in weeks. This is going to be a long-term project.” Therefore, Congress needs to look to the long term, ensuring that the instruments of national power are sufficient to stem the rise of a new global transnational terrorist threat and spreading war in the Middle East, which could lead to greater and even more dangerous and destructive conflict.

Two key U.S. interests are at risk as a result of the current situation. The first is the defense of the American homeland, as well as American assets and individuals overseas. For many months, pipelines have been funneling foreign fighters into the conflicts in Syria and Iraq. One recent estimate put the number at over 10,000, including over 3,000 Westerners.

Recruiting foreign fighters is a well-established tactic employed by Islamist extremist groups. Fighters not only add to the ranks undertaking terrorist acts, insurgency, and military campaigns in the operational area; they also become instruments to spread terrorist violence—establishing or inspiring terrorist cells in other countries, spreading propaganda, and providing a cadre of leadership and trained technical advisors for extremist movements in other countries.

As documented by the 9/11 Commission, a base of operations in Afghanistan was a prerequisite for the planning and execution of the 9/11 terrorist attacks. Even without a new established base of operations on the scale of what al-Qaeda established in Afghanistan, Islamists have plotted at least 63 attacks against the U.S. since 9/11, including three that were successful. A terrorist state in Iraq, committed to attacking the West, would represent an even greater threat against the U.S. homeland and U.S. interests and allies in the West. This base would have more resources and greater access to the West than al-Qaeda did prior to 9/11.

A second U.S. interest is the adverse consequences that could result from the war in Iraq spilling over into other countries and destabilizing the region. In particular, one consequence of the current insurgent campaign is the potential to spark a broader sectarian conflict that could engulf U.S. allies in the Middle East and cause worldwide disruptions.

The president’s focus on humanitarian interests in the Iraq conflict misses the big picture. The best way for the U.S. to mitigate human suffering in Iraq is to help restore peace and stability in the country.