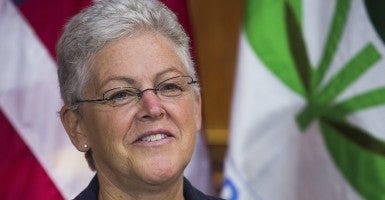 Bill Burton, a senior fellow with the Center for American Progress Action Fund, not only attacked Rep. Mike Kelly, R-Pa., in print recently for bashing the administration’s climate change regulations, but called a Heritage Foundation report Kelly used for support “flawed” as well. But a quick look at the facts reveals it is Burton’s arguments—and the policies they support—that are flawed.

This all started earlier this month when Kelly, in a Wall Street Journal op-ed, characterized the Obama administration’s Clean Power Plan to reduce carbon dioxide emissions 30 percent from existing power plants by 2030 as all pain, no gain.

Burton fired back, writing in The Hill, “[L]et’s not get distracted by the rhetoric, let’s look at the facts. In his piece Kelly cites two studies irrelevant to the actual proposed rules and wrongly says that the EPA plan will close power plants and do little to fight climate change.”

Later, it says, “Kelly used a Heritage Foundation study released in June to show the negative impact of the Clean Power Plan. The Heritage study wrongly assumed a complete phase out of coal, while the EPA plan maintained coal as 30 percent of future energy. Even the Heritage Foundation admitted its study did not ‘model EPA regulations.’”

That’s right, we did admit—and stated clearly in the study—we did not model the EPA Clean Power Plan. That’s because we wanted our results to reflect the reality that, as bad as they are for consumers by themselves, EPA’s regulations for existing power plants are just one element of a campaign that will drive out coal and drive up costs for all American families and businesses.

Beyond those lie even more stringent regulations with unworkable timeframes and questionable benefits for mining activities. Coal exports became the latest victim after Oregon blocked a coal export project.

Remember, it was President Obama’s former climate advisor who said “A war on coal is exactly what’s needed.” That’s why, when looking at the onslaught of new regulations facing the industry, we did not analyze just one regulation in isolation but instead the administration’s blueprint for its attack on affordable, reliable energy. This is why our analysis phases out coal over a 23-year timeframe and projects job losses of nearly 600,000 and lost family income of $1,200 per year.

Burton also criticizes Rep. Kelly for saying the administration’s climate plan will do nothing to do mitigate climate change. And perhaps Burton has a point here – if you consider .018 degrees Celsius by the end of the century something. Using the EPA’s own model, climatologists Paul Knappenberger and Pat Michaels project that the administration’s climate plan will avert less than two one-hundredths of a degree C of warming over the next 86 years.

In other words, when one looks at the facts and faces reality, it is not the Heritage analysis that is flawed but Burton’s analysis and the administration’s climate change plan itself.