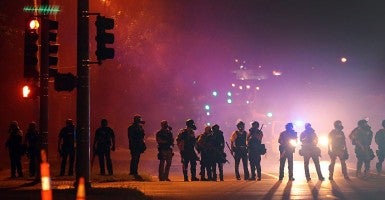 President Obama appealed for calm in Ferguson, Mo., as tensions mounted between some black residents and police in the St. Louis suburb on the fifth day since the fatal police shooting of a young black man. Relative peace returned to the town last night after one of its own, a captain with the Missouri Highway Patrol, assumed command of the streets.

“There is never an excuse for violence against the police,” says @BarackObama.

Out-of-state liberal activists stoked emotions in the case, “police militarization” became the buzz, and the Department  of Justice moved on its own probe. Across the nation, Americans at coffee shops and on cable TV swapped opinions on how authorities were approaching the case and whether associated looting and riots could have been avoided.

>>> Update: Ferguson Police Chief Thomas Jackson, in a short statement to reporters about 9:45 a.m. ET today, identified the officer who shot Michael Brown as  Darren Wilson, a six-year veteran of the force.

By order of Gov. Jay Nixon, the Missouri Highway Patrol yesterday took control of the town under the command of  Capt. Ron Johnson, who is black, the Associated Press reported.

“We’re going to have some conversations with [demonstrators] and get an understanding of what’s going on,” Johnson said.

Tensions in Ferguson escalated after Michael Brown, 18, was shot and killed by a police officer Saturday. Witnesses said Brown was not armed. Protests and riots erupted across the town of 21,000 in the days that followed.

Speaking to reporters on Martha’s Vineyard yesterday, Obama addressed the situation in Ferguson, condemning those who resorted to violence and looting. He said:

I know that emotions are raw right now in Ferguson. There is never an excuse for violence against the police or for those who would use this tragedy as a cover for vandalism or looting. There is also no excuse for police to use excessive force against peaceful protests or to throw protesters in jail for lawfully exercising their First Amendment rights.

Although the St. Louis County Police Department led the initial investigation into the shooting, Attorney General Eric Holder instructed the Department of Justice’s civil rights division to step in. The FBI also has been tasked with looking into the case.

Hans von Spakovsky, a senior legal fellow at The Heritage Foundation, told The Daily Signal that the county police investigation ought to be completed before the federal government gets involved. He said:

The key question is, did the policeman use excessive force and act in a way he shouldn’t have? That investigation should be given time before anybody starts making accusations or reacting in any way.

Von Spakovsky, who previously worked for the Department of Justice’s civil rights division, challenged law enforcement in Ferguson to reach out to community leaders to mitigate tensions and violence between the police and protesters. Those leaders, he said, should speak with rioters to “make them understand that this kind of behavior isn’t OK.” He added:

If need be, if the local community doesn’t trust the police, then fine, bring in the National Guard, U.S. marshals, state troopers, if that’s what’s needed to make sure this kind of violence doesn’t erupt.

The heavily armed police response to rioters and looters in Ferguson called attention to what some analysts call the “militarization of police,” ranging from gas masks and short-barrel 5.56 mm rifles to armored vehicles.

“Washington has incentivized the militarization of local police,” says @SenRandPaul.

County police reportedly obtained much of the equipment through a Department of Defense program called 1033 in which military equipment is given or sold to police forces across the nation.

There is ample evidence of situations where police have been ‘outgunned’ in fighting normal criminals, and if they have to deal with terrorists, this is doubly true. All this argues for some provision of what some people consider military-style gear for police.

However, Bucci said, equipment such as body armor and AR-15 carbines should be used only under certain conditions:

This equipment is there for special, extreme situations, and in those situations they are appropriate. They should not be used for normal execution of duties.

For example, local police shouldn’t break out the body armor to “execute a court order for late child support, or for a common domestic disturbance,” Bucci said. It could be appropriate, however, in responding to an active shooter or conducting a drug bust in a meth lab.

In an op-ed for Time, Sen. Rand Paul, R-Ky., called events in Ferguson a result of big government, writing:

Washington has incentivized the militarization of local police precincts by using federal dollars to help municipal governments build what are essentially small armies — where police departments compete to acquire military gear that goes far beyond what most of Americans think of as law enforcement.

Kara Dansky, a scholar at the American Civil Liberties Union, said the problem with providing local police agencies with military equipment is that police officials and officers feel the need to put it to use.

“The militarization of policing has occurred almost in the absence of public oversight,” she told Vox.

>>> Overmilitarization: Why Law Enforcement Needs to Scale Down Its Use of Military Hardware and Tactics