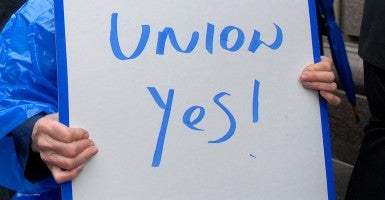 It’s not just the Internal Revenue Service that allows hundreds of employees to do union business full time on the public’s dime.

“Taxpayers spent around $156 million [in 2012] on federal employees who did no federal work at all,” said Nathan Mehrens, president of Americans for Limited Government.

An earlier report revealed how the practice—known within the agencies as “official time”—is subsidized by the IRS. Mehrens uncovered similar behavior at other agencies.

At the IRS, 286 full-time staffers worked exclusively for the National Treasury Employees Union while receiving government paychecks in 2012 (the latest year for which statistics were available).

Americans for Limited Government exposed several other agencies that fully fund union business with public money. They include:

“At least one of these 250 doesn’t even report to work at a department facility, but rather ‘teleworks’ from a private AFGE office in D.C.,” Mehrens said.

Department of Transportation. Some 35 DOT employees who work exclusively on “official time” receive average annual salaries of $138,000 or more. Some receive more than $170,000.

Environmental Protection Agency. The EPA pays more than $1.6 million per year to employees who work for the union full time.

National Labor Relations Board. The NLRB has two employees working for its union full time. Each makes more than $100,000 per year.