Q&A: How Should the U.S. Respond to New Violence in Iraq? 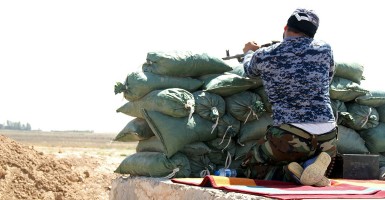 A popular committee fighter supporting Iraqi government forces campaign against jihadist militants from the Islamic State (IS) guards a position in the town of Taza Khurmatu, roughly 20 kilometres south of the disputed northern Iraqi city of Kirkuk as fighting on the front line continued on August 8, 2014. [Photo via Newscom]

Military expert Steven Bucci, director of the Allison Center for Foreign Policy Studies at The Heritage Foundation, takes your questions on the current situation in Iraq.

Q: What is the U.S. doing in response to  the Islamic State’s violence in Iraq?

The U.S. was again caught by surprise by the insurgent army known as the Islamic State of Iraq and al Sham. Its rapid advance on the Kurdish capital of Erbil and threat to kill 15,000 minority civilians trapped on a mountain may prove to be the spur to action.

President Obama announced two operations in support of the Iraqi government. One is humanitarian aid (food and water supplies will be dropped from planes) to minority Yezzidis trapped by ISIS forces on a remote mountain top, and the other is the authorization for combat air strikes if ISIS moves closer to Erbil, where a large number of U.S. personnel are stationed in a consulate. There is also a small U.S. military element in Erbil who were coordinating with the Kurds.

This is not an adequate policy.  It is a knee-jerk reaction that is too little, too late. Using air power alone to “plink” at individual vehicles and pieces of equipment did not work in Kosovo for Bill Clinton and will not work here.  The policy of “do as little as humanly possible” just so you can get credit is now coming home to roost. This requires a much larger regional response.  ISIS is a regional threat, and it will take cooperation from numerous sources to deal with it.

ISIS has shown itself to be ruthless with the persecution, torture and even murder of minorities (Christians, non-Sunni Muslims, etc). There is every reason to believe it will follow through with its demand that the Yezzidis convert to Islam or die. The group is trapped on Mt Sinjar in northern Iraq. It includes mostly women and children.

Q: Does the Iraqi government want the U.S. to intervene?

It was emphasized in the White House announcement that the Iraqi government had requested this support. Additionally, there were great pains taken to ensure it was understood that no additional U.S. ground troops will be deployed.

There had been earlier reports the U.S. already had conducted air strikes in Iraq against ISIS targets, but these proved to be false. These earlier actions were likely conducted by the Iraqis air forces themselves. They clearly are not sufficient to address the situation.

Q: How serious is this?

The situation is grave. ISIS has shown itself to be very clever. Rather than moving on Baghdad, as expected, it appears to be looking for, and finding, weak spots. The move against Erbil was not anticipated.

Many experts have noted the reversals the Kurds have suffered are stunning. The Peshmerga (Kurdish militia) had a reputation for extreme toughness and military capability. It was thought it would form a bulwark against which ISIS would flounder. ISIS’s ability to push Peshmerga out of areas it has controlled for extended periods is not a good sign and indicates ISIS is a force to be reckoned with. It now must be considered more than just a terrorist group.

The concern is growing that even if ISIS can be driven back, there may be irreparable damage done. Its present control of an Iraqi dam, electric production facilities and oil infrastructure means it can at the very least damage or destroy these key locations as it withdraws.

There are reports that ISIS continues to expand in other areas as well. It is operating in Syria and Lebanon. It is not widely reported, but an ISIS affiliate moved into northern Lebanon, and the army has failed to dislodge it. This ability to operate in multiple locations against disparate targets is another sign that this is a very dangerous foe, not just to Iraq, but to the region.