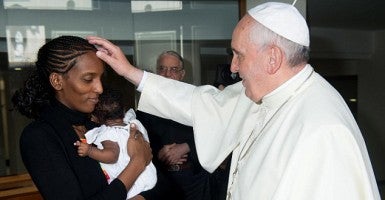 Meriam Ibrahim and her newborn after being released from captivity in Sudan. (Photo: Greg Burke Rome via Twitter)

After spending several harrowing months in Sudan, Meriam Ibrahim Ishag, the mother of two who was sentenced to death for refusing to renounce her Christian faith, has left the African country for Italy.

According to BBC, the Sudanese government granted Ishag permission to leave the U.S. Embassy in Khartoum. The 27-year-old mother, her husband, Daniel Wani, and their two young children arrived in Rome today and were greeted by Italy Prime Minister Matteo Renzi, who arranged the flight.

“Today is a day of celebration,” he said.

While in Rome, Ishag met Pope Francis at his Santa Marta residence at the Vatican. Father Federico Lombardi, a spokesman for the Vatican, said the pope thanked Ishag for “her witness to faith” and said the meeting was intended to show “closeness and solidarity for those who suffer for their faith.”

Ishag, a native of Sudan, was charged with adultery and apostasy for refusing to convert to Islam several months ago. A Sudanese court sentenced her to 100 lashes and death by hanging two years after giving birth. Ishag’s son, Martin, and newborn daughter, Maya, were also imprisoned.

The mother, a physician, was freed after a court in Sudan ordered her release last month, but was re-arrested hours later. After much confusion and uncertainty, Ishag and her family were then released and sought refuge at the U.S. Embassy, where they remained until today.

Sen. Ted Cruz, R-Texas, has been a vocal advocate for Ishag and joined Christian groups in front of the White House last month to rally for her release from Sudanese prison. In a statement today, Cruz celebrated Ishag’s arrival in Italy. He said:

Truly the Lord works in mysterious ways. Ms. Ibrahim’s long trial seemed at times hopeless, as a powerless woman was victimized by a brutal government that would torture and kill its own citizens for their faith. But its beautiful conclusion today when Pope Francis laid his hands on her in blessing reminds us of the boundless power of pure faith to lift up and preserve the weak and oppressed.

Wani, Ishag’s husband, was born in Sudan and became a naturalized U.S. citizen in 2005. He resides in New Hampshire. Ishag is awaiting a visa to emigrate to the United States.