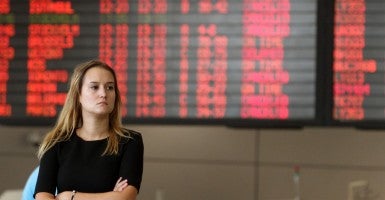 The Federal Aviation Administration’s decision to temporarily ban U.S. flights to Israel escalated into a political showdown today between the Obama administration and Sen. Ted Cruz.

Following the FAA’s decision to extend the ban for a second day, the Texas Republican accused President Obama of using the federal agency to “launch an economic boycott on Israel” as the country fights a war against Hamas.

After a rocket landed within a mile of Tel Aviv’s airport Tuesday, the FAA prohibited U.S. flights from landing or taking off. Upon assessing the security situation in Israel late Wednesday night, the FAA said it had lifted the ban effective at 11:45 p.m. ET.

“President Obama has shown contempt for the Israeli government. He has been no friend to Israel.” [email protected]

While the ban was in effect, Cruz asked the agency to respond to five questions about the ban,  including any political discussions that may have taken place with the White House. He also asked why the FAA still was allowing flights over Ukraine in the wake of the Malaysian Airlines attack that killed 298 people last week.

“The facts suggest that President Obama has just used a federal regulatory agency to launch an economic boycott on Israel, in order to try to force our ally to comply with his foreign-policy demands,” Cruz said.

Rebuffed, Cruz is now threatening to block all State Department nominees until his questions are answered. He said:

Serious questions were asked about the nature of a decision that handed Hamas a public relations victory and could have cost Israel billions of dollars. The only thing ‘offensive’ about this situation is how the Obama Administration is spurning our allies to embolden our enemies; the only thing ‘ridiculous’ is the administration’s response to basic questions.

The Heritage Foundation’s Nile Gardiner said Hamas views the flight ban as “big victory” because it leaves Israel increasingly isolated. Gardiner, who considers Obama to have contempt for Israel,  said Cruz was right to question the decision.

>>> Q&A: What Is This Iron Dome That Is Protecting Israel From Hamas Rockets?

“Far too often, the Obama administration behaves as an imperial presidency when anyone questions its authority,” said Gardiner, who directs Heritage’s Margaret Thatcher Center for Freedom. “President Obama has shown contempt for the Israeli government. He has been no friend to Israel.”

Halting flights here—when the airport is safe—hurts Israel and rewards Hamas for attacking Israel. Hamas wants to shut down the airport; we can’t let that happen. I’m a pilot—and I’ve always believed the FAA does a great job—and still do. But on this issue, I think the agency got it wrong.