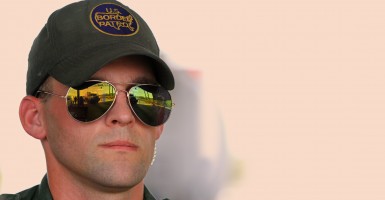 As Texas Gov. Rick Perry activates troops to help manage a surge of immigrants entering his state through Mexico, Border Patrol agents responsible for apprehending the illegal crossers say they do not want assistance from the National Guard to secure the border.

Perry announced Monday he would deploy up to 1,000 National Guard troops to help manage a crisis on Texas’ southwest border with Mexico.

House leaders also favor summoning troops to the border to stem the tide of Central American children illegally crossing there.

A group of mostly border-state Republicans released a plan Wednesday that would deploy the National Guard “to assist Border Patrol in the humanitarian care and needs of the unaccompanied minors, which will free up the Border Patrol to focus on their primary mission,” the group’s leader, Rep. Kay Granger, R-Texas, said in a statement.

But Border Patrol agents, and leaders from their union, argue that the National Guard would not augment existing manpower because troops are limited in what they can actually do.

Shawn Moran, vice president for the National Border Patrol Council, says when troops were deployed to border states in 2006-2008 for Operation Jump Start, they could not “make contact with illegal aliens,” let alone arrest them.

The troops were also unarmed.

“They were mostly line-watching with binoculars on mountains and helping use surveillance cameras,” said Moran, speaking at a Border Patrol event Wednesday on Capitol Hill.

Moran said Border Patrol would have to assign agents to stand side-by-side with troops, diverting resources from arresting people.

“The theory is that it [the National Guard] frees up agents to do patrols,” Moran said. “But it takes a lot of training and experience to put agents in the right places. There’s no net gain in manpower. The National Guard is good at building infrastructure, like border fences and all-weather roads. They’re the best in the world at that. But I have serious concerns about how they will be utilized. We have to see what the governor has in store.”

Perry messaged his decision to deploy troops to the border as a way to help the Texas Department of Public Safety combat criminal activity, such as drug and human smuggling.

“The action I am ordering will tackle this crisis head-on by multiplying our efforts to combat the cartel activity, human traffickers and individual criminals who threaten the safety of people across Texas and America,” Perry said Monday.

But they can refer those they suspect have entered the country illegally to the Border Patrol.

John F. Nichols, the adjutant general of the Texas National Guard, said in a briefing with Perry Monday that, “If we were asked to, we could detain people. But we’re not planning on that. We’re planning on referring and deterring.”

Operation Strong Surge costs $1.3 million a week; the combined operation, with the National Guard deployment, will cost more than $17 million a month. It’s unclear how it will be funded, Perry said.

“Sending troops is much more expensive than any enhanced manpower that would come internally,” said Brandon Judd, president of the Border Patrol union, which represents 16,500 agents. “There’s a reason we don’t put military on the border and have them arrest people. I don’t know how they would have arrest power unless you trained them in immigration law to learn how to enforce those laws. It opens the government up to lawsuits galore.”

In commentary for The Daily Signal, David Inserra, a Heritage Foundation homeland security expert, and Steven Bucci, a foreign policy specialist at the think tank, argued deploying the National Guard could help stem the border surge in the short term, but that the problem requires a stronger solution.

“Border Patrol is right to consider the National Guard as not a cost-effective solution,” Inserra said. “Longterm, we need to have better technology to make existing Border Patrol more effective. We also have to change the enforcement policies that encourage illegal immigration. If our laws are not being enforced, it makes Border Patrol agents jobs more difficult.”