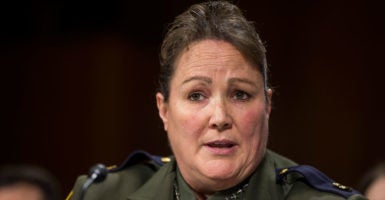 U.S. Border Patrol Chief Carla Provost broke down in a testimony to Congress why the situation at the U.S.-Mexico border qualifies as a national security crisis.

“There is an ongoing debate as to whether this constitutes a border security crisis or a humanitarian crisis. Let me be clear, it is both,” Provost, President Donald Trump’s top border official, said Tuesday during a hearing in the House Judiciary Committee.

Provost’s comments run counter to claims made by Democrats and other Trump critics who argue that, because border apprehensions are down considerably from 20 years ago, there is no actual crisis. While the 361,000 people the Border Patrol caught in fiscal year 2018 is less than half of the 1 million who were caught in the 1990s and 2000s, Provost says there is more to the numbers than meets the eye.

“I’ve been asked many times how the current situation can be a crisis compared to years when we surpassed 1 million apprehensions,” the Border Patrol chief said to lawmakers. “To understand the numbers, you have to look at what’s happening on the ground.”

In years past, the majority of those apprehended at the border were Mexican nationals who, after taken into custody and documented by Border Patrol, were handed over to Immigration and Customs Enforcement’s Enforcement and Removal Operations office for deportation. In present time, more than half of all border apprehensions are Central American children or families. Due to a 2008 trafficking law, the children cannot be immediately deported because these they are not from Mexico or Canada.

Provost says the demographic changes have stretched her agency thin.

“Each day, nearly 25 percent of my agents are diverted away from our border security mission to care for, transport, and process family members and unaccompanied children,” she said Tuesday. “We know that when agents are occupied, narcotics smugglers, criminal aliens, gang members, and others use the opportunity to violate our borders and our laws.”

Agents are being challenged with other requests that are clogging their operations, in addition to the demographic changes. Many of the apprehended migrants are asking for medical care, requiring around 5,000 of her 2,000 agents to care and transport them to medical centers instead of manning the southern border.

Provost’s comments fly in the face of numerous Democratic critics who have deemed Trump’s crisis declaration a “fake emergency.” Congressional Democrats on Tuesday voted to block Trump’s emergency declaration, and a number of progressive groups are suing to block the move in court.

Trump is using the declaration to secure a total of $8 billion to fund wall construction on the U.S.-Mexico border.