The Deep Roots of the Border Crisis 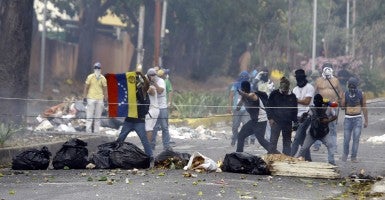 The violence in Central America that leads to the crisis at our border is not an isolated example of policy gone awry but the tipping point of a failing policy on Latin America. Exhibit 1 is Venezuela. We don’t hear much about Venezuela anymore since the Obama administration let its dictatorial president regain the upper hand.

Yet, Venezuela is the distribution point for much of the drugs that end up in Honduras, Guatemala and El Salvador, which are then shipped from there to the United States. It is estimated that 75 percent of illegal drug flights outbound from South America land in Honduras and originate in Venezuela.

The cartels and street gangs that transship the drugs have overwhelmed the armed forces of Honduras, Guatemala and El Salvador, giving them the No. 1, 4 and 5 highest murder rates in the world. This is why, when Central American parents hear from coyote networks that the Obama administration will give their children asylum, they swallow hard and hand them over to be taken through Mexico and deposited at the Rio Grande.

The Obama administration has known about this complete breakdown of order in our hemisphere for years. In fact, it has contributed to it through its own inaction and refusal to side with democratic forces in the region.

Two courageous Venezuelan journalists daily take personal risks to make sure Venezuela does not descend into a Cuban-style totalitarian dictatorship: David Moran and Gustavo Ocando. The first is the editor of LaPatilla.com, the leading online news publication in Venezuela with 42 million visits per month, and the second is editor of the daily La Verdad, a regional affiliate also with significant reach. These leaders of two of only a dozen opposition media outlets left in Venezuela were in Washington last week to drum up international support for democracy in their home country.

“The Obama administration lost a golden opportunity when it decided not to sanction government officials involved in human rights abuses,” said Moran. The time to act was in February when thousands of pro-democracy demonstrators were taking to the streets daily in Caracas and other Venezuelan cities.

“It was a golden opportunity to deliver a moral blow to the government” of President Nicolas Maduro, he said.

Brazilian President Dilma Rousseff, a socialist herself, always has been easy on other socialists from Caracas to Havana. But this is not just a question of Marxist solidarity: Brazil’s construction giant, Odebrecht, has $20 billion in projects in Venezuela and an estimated $1.2 billion invested in Cuba, which explains why Rousseff’s administration is deeply committed to the survival of the two dictatorial regimes.

“The Obama administration asked Rousseff for permission to stand up for freedom in Venezuela, and when Brazil did not give its permission it did not wave the flag of freedom,” said Moran. Ocando rolls his eyes, too, when discussing the administration’s decision to follow Brazil’s lead. “The administration has lost its touch. It is very timid with Venezuela,” said Ocando.

Instead, the State Department counseled the leaders of the demonstrators and the political opposition to sit down and have a dialogue with Maduro, while opposing the sanctions that would have kept pressure on the Maduro government—talks he used to buy time and deflate the street pressure.

Now that the streets are quiet, Maduro once again has the upper hand and has called off the talks. So much for the State Department’s advice.

“The Obama administration has done little or nothing to prevent the repression against political and social actors, including the few independent news outlets that still exist,” Ocando said.

A Venezuela run by Maduro and other chavista henchmen is not in the U.S. national interest. As much as 25 percent of Colombia’s cocaine runs through Venezuela, with which Colombia has a porous 1,375-mile border. Ocando’s paper last year reported how remote indigenous villages near the border have been taken over by drug traffickers, turning the jungle into a scene from a Jack Ryan movie.

Today, said Moran sadly, Venezuela “is a country run by narco-traffickers” and Caracas has 162 murders a year per 100,000 inhabitants.

Previous administrations have dealt with bad actors in our hemisphere by supporting those who share our values, as President Reagan did with President Jose Napoleon Duarte in El Salvador and President George W. Bush with Colombian President Alvaro Uribe. Outsourcing policy to a socialist in Brasilia is not how a superpower behaves.

The Administration should send Venezuela’s opposition a clear message of solidarity, and get serious with Maduro by enacting targeted sanctions against key Venezuelan government officials, including revoking their visas and freezing their assets within the United States.