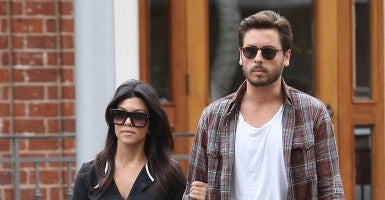 Kourtney Kardashian, who stars on her family's reality TV show 'Keeping Up With The Kardashians,' is expecting another baby with her long-term partner Scott Disick. After eight years, and two kids together, Kardashian is 'so not interested' in getting married. (Photo: Newscom)

Of course, this doesn’t necessarily mean today’s young people have completely kicked marriage to the curb. It may just mean that they are less enthused about marriage at this point in their lives, as an Atlantic article points out .

In fact, another poll from 2013 shows that the majority of Millennials are interested in marriage: 75 percent are either married or want to get married. College educated and non-college educated, white and non-white alike say that they hope to marry. Data from high school seniors reported in 2011 tell a similar story. About 80 percent of these young women and 70 percent of the young men say that having a good marriage and family life are extremely important goals for them – percentages that haven’t fluctuated much since the 1970s.

But there’s a difference between wanting to be married eventually, and understanding the importance of marriage to society. Along with the Pew study, data from high school seniors taken between 2007-2010 shows that the majority believe marriage isn’t necessarily any better than living with someone or remaining single. Data from high school seniors collected between 2001 and 2004 reveals that most believe having a child prior to marriage is a worthwhile lifestyle choice or doesn’t affect anyone else.

All this underscores that today’s young adults don’t seem to understand why marriage is generally a better choice for individuals than cohabitation or having a child outside of marriage.

Married adults are healthier, have higher incomes and are more likely to invest. They are also more likely to actively participate in their communities through volunteering.

Children born to married parents also have key advantages. Regardless of the parents’ education level, they are far less likely to be poor. They are more likely to graduate from high school and college, avoid delinquency and drug abuse and avoid becoming single parents.

The unwed childbearing rate, however, is at an all-time high, particularly among the most disadvantaged. Marriage rates are dwindling and divorce rates are high.

Unfortunately, there is little talk of the importance of marriage in our current culture. That needs to change. This message about marriage’s importance needs to be heard — because it helps support the institution that the vast majority of Americans desire for themselves and their children.