$6 a Gallon? Where Gas Prices Might Be Without the U.S. Energy Boom 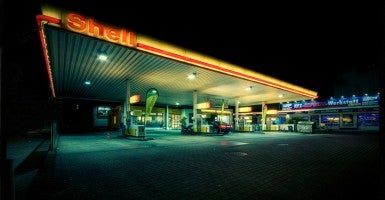 If you think the price of gas is high, imagine paying up to $6 a gallon.

That’s what energy expert Dan Steffens thinks the price could be if not for the domestic oil boom.

“With what’s going on the Middle East, I think it would five or six bucks [a gallon],” said Steffens, president of the Energy Prospectus Group of Houston. “If it wasn’t for the shale revolution, you’d be in big trouble.”

Technological breakthroughs in recent years have led to an explosion in the energy industry in the United States. Extraction from shale rock formations in places such as the Bakken Formation in North Dakota, the Eagle Ford Formation in south Texas and the Permian Basin in west Texas and eastern New Mexico has been so dramatic that, last month, the International Energy Agency announced the United States surpassed Russia and even Saudi Arabia in oil production.

There’s been a 60 percent increase in U.S. oil production in the past six years, according to Bernard Weinstein, associate director at the Maguire Energy Institute at Southern Methodist University, and exports of refined products are hitting 20- and 30-year highs, Joseph Dancy, investment partner at LSGI Advisors, Inc., based in Dallas, told New Mexico Watchdog.

Did fracking save American drivers from $6 gas?

Steffens said the current international state of affairs—violence in Syria, Iraq and Libya, as well as political unrest in the oil-rich nations of Nigeria and Venezuela—might have pushed oil prices to $150 per barrel at this point.

But benchmark U.S. crude was at $104 a barrel Monday and Brent crude, a benchmark for the international market, was down 33 cents last week to $110.91 a barrel in London.

“There’s no question that this his newfound abundance of oil from shale plays is having a significant impact on the global market,” Weinstein said. “While the situation in Iraq seems to be getting worse, oil prices have actually fallen (in some sectors) because the markets now understand that Iraq could go totally off the market and there’s still plenty of oil going around, not just here in the United States. The world is swimming in oil right now.”

Ironically, President Obama benefits from stable energy prices, even though much of the energy explosion is happening in red states such as North Dakota and Texas, where Obama lost to Republican presidential nominee Mitt Romney in 2012 by nearly 20 points and more than15 points, respectively.

“It’s a wild boom and it’s all generating economic activity for a president who really does not favor the oil and gas sector at all,” Dancy said. “It is really ironic.”