The Constitution Isn’t a Liberal or Conservative Document 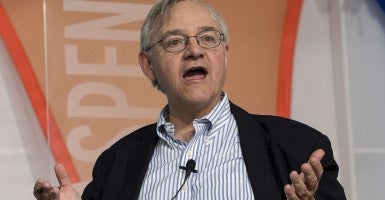 Washington Post columnist E.J. Dionne is not happy that conservatives are claiming the mantle of the Constitution. “You cannot talk for very long to a conservative these days without hearing the words ‘constitutional’ and ‘constitutionalist,’” Dionne wrote in a column published Sunday .

Dionne urges his fellow progressives to “reclaim the Constitution” and “think constitutionally themselves.” This is good advice all Americans should support.

The Constitution, after all, is neither a liberal nor a conservative document. It does not prescribe any particular policies. In fact, it allows pretty much any policy to be enacted (though not necessarily at the national level). The Constitution can accommodate high taxes, low taxes or no taxes. It allows the people to recognize traditional marriage or same-sex marriage. It empowers a president to pursue a muscular foreign policy or to withdraw into an isolationist cocoon or to sign–but not ratify–treaties with anybody.

All the Constitution does is specify whether questions can be dealt with nationally and if so, according to which rules. Its words and principles, anchored in the Declaration of Independence, definitely rule out certain laws — for example, laws that are applied retroactively — and create a system of checks and balances between different levels of government. But within the confines of these restrictions and delineations, it leaves the people entirely free to deliberate, via their elected representatives at the appropriate level of government, on the questions and problems of the day.

Herein lies the rub for many on the Left. For all their talk of the virtues of localism, progressives dislike localism when it extends beyond the organic kale stand at the farmer’s market to the legislative chambers of city hall and the state capitol. For the most part, liberals demand a one-size-fits-all approach to all major, divisive policy questions. And they complain about gridlock when a national Congress, explicitly designed to ensure laws pass only when a broad national consensus exists, fails to enact many laws.

To follow Dionne’s exhortation and think constitutionally, progressives would have to accept much more diversity than they seem comfortable with. They would have to let the people of Texas create as red of a state as they want. The people of Vermont would, of course, remain free to create their own-mini Sweden in the Green Mountains. And most importantly of all, the American people would be free to vote with their feet and pick from 50 different models of governance. Now that’s diversity.

Before progressives reclaim the Constitution, they should begin by reading the actual document. They should read not just the first three words of the preamble—the “We the People” which they are so fond of and which Dionne predictably cites—but also the remaining 7,588 words which carefully delineate the powers of Congress, establish a federated republic and remind Congress that the “powers not delegated to the United States by the Constitution, nor prohibited by it to the States, are reserved to the States respectively, or to the people.”