The War on America’s Independence 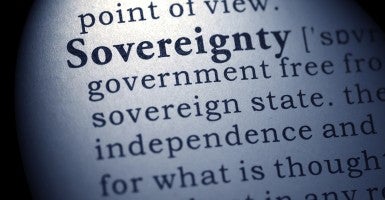 They called it the Declaration of Independence, but what Jefferson, Adams and the other Founders actually did 238 years ago today was separate the United States from a foreign nation, severing itself from the sovereignty of King George III.

U.S. sovereignty was hard-fought. The Declaration was just the beginning. It took seven years of war and tens of thousands of American lives to secure the 13 colonies under a single flag. What was once British territory became American territory. Sovereignty over one’s territory is key to maintaining a nation’s independence—just ask Ukraine about Russia’s “acquisition” of Crimea. Protecting one’s borders is equally important—just ask Syria and Iraq about their border, a portion of which was recently bulldozed by ISIS.

But just as important as territorial sovereignty is legal sovereignty, which is how a nation’s independence truly is measured. A people technically may possess their territory but be under the dominion of another nation. A nation under military occupation by a foreign nation is not independent. Even when the U.S. returned sovereignty to the government of Iraq in 2004, the country was not truly independent until many years later.

So as America celebrates its birthday today, let us take the measure of our sovereignty. Territorially, Americans need only look to the south for a reminder of how lax border enforcement can lead to chaos as more than 50,000 children have streamed over the U.S.-Mexico border in recent months. It is difficult to call a nation sovereign if it is unable to control its own borders. Why is it that an additional $2 billion and a “sustained border security surge” is necessary to prevent tens of thousands of illegal immigrants from entering our nation? Such negligence indicates, at best, a serious lack of commitment to our territorial integrity.

And what about our legal sovereignty? The Obama administration has urged Congress to ratify treaties that would make the drafters of the Declaration blanch. The United Nations Convention on the Law of the Sea would subject the U.S. to baseless international lawsuits and require the U.S. Treasury to transfer millions of dollars in offshore oil royalties to the International Seabed Authority in Jamaica for “redistribution” to the so-called developing world.

The Convention on the Rights of Persons with Disabilities would subject U.S. disability laws to the scrutiny of a committee of supposed experts holding court in Geneva. The administration also is preparing to sign the Ottawa Mine Ban Treaty, which would require the U.S. to ban its anti-personnel landmines, depriving U.S. armed forces of a key tool for shaping the battlefield. Again, ask Ukraine, which ratified the Ottawa Treaty in 2005, how its zero-tolerance landmine policy is working for it as Russian tanks roll into its territory.

In the Declaration, the Founders complained about being subject to foreign taxation, to being subjected to “a Jurisdiction foreign to our Constitution,” and to being transported across the seas to face criminal charges in a foreign land. The Declaration gave notice that these infringements on American sovereignty would not stand. Yet the Obama administration would have Americans subjected to taxes from the International Seabed Authority and U.S. laws and policies adjudicated by international committees sitting in Switzerland. Some American progressives would even have our military leaders and servicemen tried by the International Criminal Court for war crimes in The Hague, Netherlands.

Today, as in 1776, such infringements on American sovereignty must not stand. The drafters of the Declaration would be shocked to find Americans submitting themselves to the will of international organizations. The United States should, of course, work with other nations in a principled way that advances its national interests. But the Founders would be amazed by the extent and depth of the threats to American sovereignty posed by this new progressive vision.

The Founders did not risk their lives, fortunes and sacred honor casting off the rule of King George III so that, more than 200 years later, America could subject itself to the whims of unelected foreign bureaucrats. Sovereignty was essential to the founding of America in 1776, and it is essential to America today. Happy Sovereignty Day!