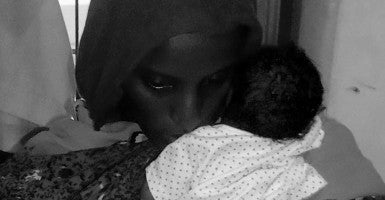 The woman who was sentenced to death in Sudan for her Christian faith says she fears her newborn baby is physically disabled because her legs were chained while she was in labor.

“Something has happened to the baby,” Meriam Ibrahim Ishag, now out of prison, told The Guardian newspaper in her first interview since giving birth to a daughter while imprisoned. She added:

I gave birth chained. Not cuffs – but chains on my legs. I couldn’t open my legs so the women had to lift me off the table. I wasn’t lying on the table.

The Khartoum Court of Appeals canceled the 27-year-old Sudanese mother’s death sentence and ordered the charges against her dropped. Now, Ishag is “temporarily detained” in Sudan with her family.

A lower Islamic court on May 15  had sentenced Ishag to 100 lashes for adultery for marrying a Christian — he is also a U.S. citizen —  and death by hanging for apostasy for refusing to renounce her Christian faith. She was imprisoned with the couple’s 22-month-old son and forced to give birth to daughter Maya in conditions that she fears may have caused permanent damage.

Ishag, a medical doctor, told the Guardian that she doesn’t know whether her daughter will ever be able to walk without support.

On June 24, State Department spokeswoman Marie Harf told reporters the Sudanese government “has assured us of [the family’s] safety,” and said U.S. officials were “engaging directly with Sudanese officials to secure their safe and swift departure from Sudan.”

Ishag said she was taunted in the Khartoum prison by other inmates because of her Christian faith:

Women in prison [said] all sort of things like: ‘Don’t eat the non-believer’s food.’ Even the officers in the prison would join in.

Ishag said religious scholars were sent to the all-female prison to make her renounce her Christianity. “A different sheikh coming to speak to me every other time,” she said.

Ishag, who became known as “the Sudan mom” in the Internet, said she stayed strong for her family. When asked how she responded to the death penalty, she said, “I was only thinking about my children and how I was going to give birth. I was really scared of giving birth in prison.”

Now out of prison, she said she is “miserable” waiting for the results of her lawyers’ appeal to a government claim that she attempted to leave Sudan with  forged paperwork. She added: