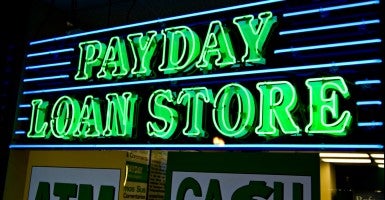 But under Operation Choke Point, the government has already been quietly regulating the industry for years.

“The idea is pretty common sense: if you lend out money, you should first make sure that the borrower can afford to pay it back,” President Obama said of the new proposal last Thursday to a crowd of about 1,800 people at Lawson State Community College in Birmingham, Ala.

Rep. Mick Mulvaney, a Republican congressman from South Carolina who has been critical of Operation Choke Point, disagrees that the CFPB’s idea is “common sense.”

He told The Daily Signal in an exclusive interview, “It’s absolutely absurd that the government would stick its nose in here.”

“Lenders do that already,” he said of the requirement for lenders to ensure borrowers can pay back their loan. “You don’t lend money to people that can’t pay it back—it’s a surefire way to go out of business.” Before the final regulations are implemented, the Consumer Financial Protection Bureau will seek comment from a small business review panel and “a wide range of stakeholders.”

Such a public debate did not occur when the government implemented Operation Choke Point.

What Is Operation Choke Point?

Operation Choke Point was launched by the Justice Department in 2013 as a way to combat consumer fraud by working with multiple government agencies to discourage banks from doing business with “high risk” industries.

The Justice Department, under Attorney General Eric Holder, carried out the program by partnering with federal banking regulators who could pressure banks from doing business with customers they considered “high risk.”

“[The Justice Department], through the Consumer Protection Branch, should take the lead in implementing this strategy,” Blume wrote.

Without a bank to deposit checks, sponsor loans or process payments, companies are constrained from doing basic business.

“The effects have been severe and drastic,” said Jamie Fulmer of Advance America, which operates over 2,500 payday lending businesses in 29 different states.

We’ve seen a number of banking relationships terminated and that severely restricts our ability to operate like any other business.

The Purpose of Payday Lenders

Payday lenders primarily exist to serve people who can’t get loans from banks. Lenders offer cash advances to people who run out of money between paychecks.

The cost of the loan is typically between $10 and $30 for every $100 borrowed, which amounts to almost a 400 percent annual percentage rate.

Critics of the industry worry that borrowers will struggle to repay the loans, which will spiral into higher fees for the customer. In Alabama, when Obama was endorsing his administration’s regulations against payday lenders, he said, “there are four times as many payday lending stores as there are McDonald’s.”

“People go to payday lenders because they can’t get quality loans at ordinary financial institutions,” Mulvaney, who’s spoken with payday lenders in his state who claim to have been victimized by Operation Choke Point, told The Daily Signal.

A 2013 national survey by the Federal Deposit Insurance Corporation (FDIC), which is one of the main agencies involved in carrying out Operation Choke Point, found that one in 13 U.S. households do not have bank accounts.

In the same report, the Federal Deposit Insurance Corporation found that 20 percent of U.S. households are underbanked, “meaning that they had a bank account but also used alternative financial services (AFS) outside of the banking system.”

“If you set the same standards for payday lenders as you do for a regular financial institution, all you’re going to do is simply drive these people into the shadows, to the loan sharks, and out of the banking system,” he said. “Not everybody likes payday, I get that, but it does serve a legitimate need in a legal manner.”

Yet, Richard Cordray, the director of the Consumer Financial Protection Bureau, which proposed the new regulations, believes consumers need protections against payday lenders.

“A consumer facing difficult financial circumstances is offered quick cash with no questions asked and in return agrees to provide access to a checking account or paycheck or vehicle title in order to get the loan,” Cordray said at a March 26 hearing on payday lending. “No attempt is made to determine whether the consumer will be able to afford the ensuing payments—only that the payments are likely to be collected.”

Despite the skepticism facing the industry, payday lenders insist that they operate in accordance to the law—and don’t deserve to be driven out of business.

Under the government’s Operation Choke Point, a number of payday lending businesses lost access to their long-term bank accounts and were forced to downsize or close.

Allison Deguisne, owner of Westshore Cash and Loan in Calif., was one of them.

“My retirement is gone,” she said last week before a congressional hearing on Operation Choke Point. “It’s taken my life savings. I am out of business in the next couple weeks.”

Deguisne told reporters that after Wells Fargo choked off her line of credit, she’s couldn’t find another bank that would accept her business.

“If we continue to shut down these industries, they won’t have anywhere to go to get loans themselves,” she said.

Amy Cantu, Communications Director for the Community Financial Services Association of America, which represents the payday lending industry, told The Daily Signal via email that she’s heard “numerous cases in our industry of businesses that are being unduly harmed by Operation Choke Point.”

“I have never said this to you (but I am sincerely passionate about this) … but I literally cannot stand the payday lending industry,” wrote Thomas Dujenski, the regional director of the Federal Deposit Insurance Corporation, to Mark Pearce, director of the Division of Depositor and Consumer Protection, in an email dated Nov. 26, 2012.

In another example, a senior Federal Deposit Insurance Corporation official insisted that the agency always mention pornography when discussing payday lenders among other “high risk” industries during talking points in an effort to convey a “good picture regarding the unsavory nature of the businesses at issue.” “It’s frustrating for us because we try to perform and carry out our business in a way that would give our banks confidence in all federal and state laws, but there’s at least one federal agency that’s de facto rule making that’s limiting our access to the baking system without due process,” said Fulmer of Advance America.

Fulmer said the Consumer Financial Protection Bureau’s proposed new rules “appear to be a validation of that concern that we’ve had all along,” that the agency has been “ignoring facts,” “ignoring research,” and is being “largely motivated and pressured by activist groups that seeks to end this credit option.”

But at the end of the day, Fulmer is grateful that this time around, he has a chance to weigh in on what the government does to his industry.