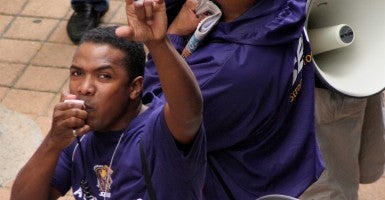 Union leaders based in Chicago racked up more than $13,000 in hotel charges to attend President Obama’s second inauguration and more than $6,000 to purchase booze for a Christmas party the month before.

If the bosses of the Service Employees International Union plan to continue spending in that fashion, though, they may have to find some new sources of cash to cover expenses such as the $1.1 million in travel their Indiana-Illinois health care unit logged in fiscal 2013. The SEIU no longer can force home-based personal care assistants to pay dues-like fees to the union.

That’s because Pamela Harris, an Illinois mother who provides health care services to her disabled son prevailed yesterday in a case before the U.S. Supreme Court that challenged compulsory union dues as unconstitutional under the First and 14th amendments.

The case, in which justices decided 5-4 in Harris’s favor,  is known as Harris v. Quinn. Harris and six of the other seven plaintiffs provide care for disabled family members in Illinois. They are paid under the state’s Medicaid program but are hired by the patients they serve.

In a commentary yesterday, The Heritage Foundation’s James Sherk and Andrew Kloster wrote:

Certainly, if the First Amendment means anything, it means the government cannot force Americans to financially support speech, especially political speech, they oppose. Today’s ruling raises the definite possibility that all government workplaces could soon become “right to work”—which would be a huge victory for the rights of free speech and freedom of association for millions of government workers.

In an email message to a reporter for The Daily Signal before yesterday’s ruling, Harris explained what happened next:

Governor Quinn then gave our names and home addresses to the SEIU, and when the other public sector union, AFSCME, asked, he gave them the list as well. Despite a union election where we voted 2:1 for no union, the governor refused to rescind the executive order. There is no expiration, so the unions can continue to come back again and again. Filing a lawsuit was the last option available to stop this. Not a penny of Medicaid funding intended to help provide care for disabled men and women should be taken away and given to the union.

I don’t want my home to become a union workplace. I don’t want a union contract inserted between my son and I. Unionizing a mom is intrusive and, I believe, will interfere in his care. There is no benefit to unionizing us.  … There is no extra [Medicaid] funding to negotiate higher wages or paid vacations. The person with the disability determines the rate of pay, the tasks to be done, when and how.

As a result of the Supreme Court’s ruling, home-based personal care assistants and child care workers who dissent from the SEIU’s political agenda can’t be forced to pay dues. This matters because many activities that union leaders categorize as non-political, representative expenditures arguably are political in nature.

Jennifer Parrish, a Minnesota child care worker who heads up the Coalition for Union Free Providers, has reviewed the LM-2 financial disclosure form for fiscal 2013 filed by SEIU’s Illinois -Indiana health care division, the union that was the subject of the litigation in Harris.

Parrish discovered airfare, hotels, car rental, buses, and other items totaling more than $1.1 million in travel expenses all over the country—all listed as “representation activity.” She found $13,000 spent on a hotel stay during Obama’s second inauguration.

In an interview with The Daily Signal, Parrish said:

I don’t think anyone can reasonably argue a local union needs to spend this much on travel as a reasonable cost associated with representing and bargaining on behalf of home care and child care providers in Illinois. If you add up all the restaurants and catering, it’s hundreds of thousands of dollars charged as representation.

Under the representation category, the SEIU affiliate also listed $6,000 to a liquor store for “beverages for a Christmas party” in 2012.  Other representation charges include $325,000 to Action Now, a group devoted to increasing the minimum wage.

Parrish also filed suit in U.S. District Court in Minneapolis on behalf of operators of child-care businesses who challenged her state’s unionization law on First Amendment grounds. The ruling in Harris was expected to put her case, and others like it, to rest.

“Since some states can set pay rates and even workman’s compensation for personal attendants, there is more of an argument to be made that they are like public employees, even though they are employed by the person receiving the benefit,” Parrish said, adding:

But child care providers are not anyone’s employee; they are business owners who set their own rates and determine what services they provide. This whole scheme is based on making the appearance that there’s some type of employer-employee relationship. With some PCAs [personal care assistants], it’s easier to blur those lines because the state does handle some functions an employer would traditionally handle. With child care providers, that’s not the case at all.