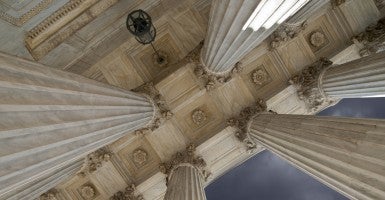 Today the U.S. Supreme Court handed down an important victory for participants in home-health care programs.  In a 5-4 decision authored by Justice Samuel Alito, the Court held in Harris v. Quinn that Illinois’ forced unionization scheme violated the First Amendment. The Supreme Court also criticized the practice of forced unionization for all government employees –indicating a future, more sweeping victory for workers’ rights might be in the cards.

Illinois and most other states make Medicaid funds available so that individuals not capable of caring for themselves can hire home care providers. In some cases these home care providers are employees of a health care company, but in most cases they are family members or friends. In other words, Joe will take care of his mother at home and receive reimbursement from the state for his expenses. This system saves the state the expense of paying for institutionalized care and allows recipients greater freedom and independence.

But in 2003, then-Gov. Rod Blagojevich, who is now serving time in federal prison, unilaterally designated these home care providers as “public employees” for the sole purpose of collective bargaining and dues payments. Illinois then negotiated a contract which required home care providers to pay dues to the Service Employees International Union. Each year the union extracted almost $4 million from parents and relatives taking care of the elderly and infirm. And several home care providers filed suit, alleging the Illinois scheme violated their First Amendment rights by forcing them to pay dues to a union whose activities they did not support.

Today the Supreme Court ruled in their favor, concluding that forcing these providers to pay union dues violated their First Amendment rights. This is a huge victory for the National Right to Work Legal Defense Foundation, which litigated the case.

In the short-term, this ruling will have only a limited impact. Most unionized home care providers have no idea they belong to a union. Government surveys show that only 100,000 home care providers report belonging to a union, but the SEIU alone reports 600,000 dues-paying home care members. In other words, the vast majority of home care providers do not know they receive services from a union — or that  unions skim money from their reimbursement checks. And in spite of today’s Supreme Court ruling, these workers might continue to pay dues without ever understanding that they have a First Amendment right to keep that money.

If these workers don’t ask the SEIU to stop, it obviously will continue to collect dues on its own. In fact, the SEIU probably anticipated this defeat. In February it began asking home care providers to sign cards to become full members. The fine print contained a clause authorizing the SEIU to collect dues from them—once signed they could not revoke that authorization except during a 10-day window each year. Under today’s ruling, this scheme could be challenged in federal court, but the bottom line is this: Unions will make it as hard as possible for home care providers to stop sending them money.

In the medium term, this ruling could halt the creative expansion of government unions. Half of all union members now work for the government. Competition from more efficient companies has eliminated millions of union jobs in the private sector. Unions have not succeeded in persuading enough new employees to affiliate themselves with unions to replace these losses. Fewer than 7 percent of private employees now hold union cards. But the government faces little competition. Inefficient union contracts hurt public services, but they do not eliminate union jobs, so union membership has remained high in government. Unions represent—and collect forced dues from—more than half of government employees in Illinois.

By creatively redefining anyone who receives a government check as a government employee, unions planned to significantly boost their membership. In addition to home care providers, unions have entered into cozy arrangements with state governments whereby parents taking care of their disabled children and individuals running at-home daycares are classified as government workers. Then they negotiated union contracts on their behalf that include mandatory dues payments — and sometimes little else.

The unions viewed this as a key way to boost membership and income, a tactic that even a long-time union officer considered reprehensible). Today’s ruling likely will put the brakes on these expansion plans. Further, other state funding regimes involving private employees designated “public employees” might be suspect; charter school employees, for example, might sue to get out of paying dues to the National Education Association union.

In the long term, today’s majority suggested it was skeptical about the constitutionality of any system involving forced dues payments for any government employee. Although Justice Alito’s opinion made it clear the Court was not considering the constitutionality of forcing “full-fledged” government employees to pay union dues today — choosing to limit its holding to a determination that home care providers did not belong to that group — the Court’s constitutional analysis makes it clear that even full-fledged public employees have First Amendment rights that may be violated by forced dues schemes.

Certainly, if the First Amendment means anything, it means the government cannot force Americans to financially support speech, especially political speech, they oppose. Today’s ruling raises the definite possibility that all government workplaces could soon become “right to work”—which would be a huge victory for the rights of free speech and freedom of association for millions of government workers.