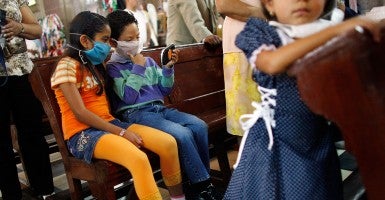 'Can get out of hand real quickly': Children in Mexico City wear surgical masks in 2009 to guard against the swine flu at a time when cases were confirmed in 18 countries. (Photo: Joe Raedle/Getty Images)

Children caught crossing the border into the United States appear well coached as they willingly surrender themselves. The youngsters respond to questions from U.S. Border Patrol agents by following directions written on printed handouts provided by smugglers.

“They carry scripts with them telling them how to answer questions,” Shawn Moran, a spokesman for the National Border Patrol Council, told The Daily Signal. Moran’s union represents 16,500 Border Patrol agents.

That’s not all the young border crossers carry, though. Besides the paper script of what to say, and sometimes identification such as a birth certificate, some bring communicable illness.

Although easily captured along the U.S. border with Mexico, the more than 52,000 children detained this fiscal year without adults to care for them arrive with challenges that threaten the morale and health of the Border Patrol agents who first come into contact with the youngsters – and initially care for them.

The children are kept in tight quarters, prompting one Arizona physician to tell The Daily Signal this morning that such conditions “could become a public health crisis.”

The Daily Signal confirmed Thursday that an unaccompanied minor was hospitalized and diagnosed with H1N1, or swine flu, after being housed at Joint Base San Antonio-Lackland, Texas, a facility run by the U.S. Department of Health and Human Services. An HHS spokesman, calling it an isolated case, said the child was responding to treatment and being monitored.

Though those who illegally enter the U.S. from foreign countries may come while sick, Moran says the illnesses generally rarely transfer to Border Patrol agents –save for the occasional  case of tuberculosis.

But today’s crisis is more acute.  Authorities anticipate they will apprehend more than 240,000 illegal immigrants in the Rio Grande Valley, about three-quarters from Central America, during this fiscal year. And the threats to Border Patrol agents are unusual.

Moran, in an interview yesterday with the Daily Signal, said other union representatives tell him that a “handful” of agents who have encountered the child migrants have been diagnosed with scabies, a contagious skin infection caused by mites.

Many of the children have lice, Moran said, but he has not heard any reports of his agents contracting lice.

Just the threat of illness – although part of the job – makes life difficult for the agents. Many are being diverted from their usual border posts to more remote areas where smugglers transfer the children, such as the bank of the Rio Grande near McAllen, Texas.

“Morale is pretty bad, between what is happening in Texas and how it’s impacting other sectors,” Moran said. “The sheer numbers [of children] are making it more dangerous. The concern about diseases like scabies is that [the agents] don’t want to bring it home to their families.”

Dr. Jason Fodeman, who practices internal medicine in Arizona,  says he is concerned about the tight spaces in which the children are contained.

“From what we’ve seen and heard, these children are in closed, tight, cramped quarters, sleeping on the floor and in close contact with each other,” Fodeman, a former health policy fellow at The Heritage Foundation,  told The Daily Signal this morning, adding:

All of that is very conducive to spreading communicable diseases, spreading it to other children and to border guards as well, who can spread it to other Americans in the community. We don’t know [the children’s]  medical background. It’s something that can get out of hand really quickly, and could become a public health crisis.

Scabies, Fodeman said, is a skin rash that is “incredibly contagious” and “incredibly uncomfortable.” As a strain of flu, H1N1 is more serious.

“If we have a patient in the clinic with scabies, after he leaves, we call our infection control people and they clean the whole room,” he said. “If a patient has scabies, I’m wearing gloves.”

Although scabies is spread by contact, Fodeman said it would not require hospitalization and is treatable by a visit with a doctor and medication.

Border Patrol agents hold children for 72 hours before  transferring them to HHS, which oversees detention shelters and works to find family or a sponsor in the United States.

Within 24 hours, a child undergoes an initial health screening, coordinated by the Federal Emergency Management Agency and conducted by a medical professional. Those screenings, however, do not include a lab test — the only definitive way to diagnose swine flu, which has similar symptoms to a seasonal flu.

Once the Border Patrol transfers the child to the HHS, medical personnel administer a “well-child exam” and give childhood vaccinations needed “to protect against communicable diseases,” the HSS spokesman said.

HHS also screens the child for tuberculosis and performs a mental health exam.

At that point, “if children have any communicable disease or have been exposed to a communicable disease, they are placed in a program or facility that has the capacity to quarantine,”  the HHS spokesman said. “If they have mental health problems, they are similarly placed in a specialized facility to meet their needs and not in a temporary shelter.”

If a border agent were to get sick, Moran said, he or she would fill out paperwork (called a CA-2 and CA-16) with the U.S. Department of Labor and then be sent to a doctor or hospital for treatment.

“In terms of quarantine, that would be up to the local medical authorities,” Moran said.

>>> Genevieve Wood: What I Saw at the Border